While Ted navigates the boundaries of labels, sex and identity, being sexually adventurous with his HIV-different partners and fuck buddies doesn’t slow Ted down in any way. 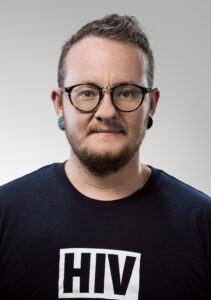 Ted grew up with an identical twin sister, or ‘womb mate’ as he likes to call her.

“I then came out to my parents and sister and my grade at school.

“It was the late nineties and I was pretty stoked to be a hard-core dyke from a Catholic girls school in Western Sydney.

“My sense of being male didn’t come until much later,” he says.

“I always identified more queer than lesbian,” he says, “and had a queer attraction to men even though I was disguised as a woman, it was a bit of a head fuck because I didn’t have a language to describe what was going on.”

So, as he started to affirm his male gender and became more comfortable in his skin, he found himself attracted to and in turn attracting men.

Today at 37, Ted sees himself as a queer man who is pretty gay.

Ted lives with a female partner and only has sex outside of the relationship with men. He and his girlfriend met before his transition and spent a year negotiating his newly found sexuality.

“Our relationship has evolved,” he says, “to where we celebrate each other’s sexual adventures.

“She’s the best and I feel very lucky to have found such a rad life partner.”

In 2014, Ted co-founded PASH.tm, a project seeking to address the sexual health needs of trans men—particularly around HIV—and consequently found he was mixing more with HIV positive gay men.

“I felt a real kinship,” he says. “I could relate to the kind of stigma they were talking about.”

He also found that positive guys were often more accepting of his own body diversity.

He finds many of the positive guys he hooks up are also sexually adventurous and he has a stable of regular fuck buddies, roughly half of whom are positive.

He met many of his partners online, where his profile is clear about him being trans and also that he is on PrEP.

Ted recalls the chat that went on before one particular hook-up:

“He told me he was poz. And I could imagine those times when people have gone ‘no thanks’, like the times I have told them that I’m trans.

“And I said to him: I don’t care. What time am I coming over?

Ted was having a lot less sex before PrEP came along.

“Testosterone sometimes changes the lining of your front hole,” he says. “So, while I wanted to use condoms, they were actually quite painful.

“Being on PrEP has been a sexual liberation for me. I now feel much more comfortable and less anxious having the type of sex I want.”

“I don’t know what it’s about,” he says, “but the like-minded guys I meet just happen to be positive. Along with other trans guys, they are the men I feel warmest towards.

“Perhaps it’s because we have all have gone through fire to get to where we are.”