Australia reported its first case of AIDS in Sydney in November 1982, in a time when there were strong preconceptions about who and how people could be affected by this little-understood illness. As the first deaths from AIDS grew in a climate of fear and prejudice, public anxiety triggered HIV stigma and discrimination.

In 1988 as a response to the NSW HIV/AIDS epidemic, approximately 150 advocates, activists and supporters deeply concerned not only with the immediate needs of those diagnosed with the virus, but with the broader impacts affecting allied sectors like sex workers, people who inject drugs, people who were incarcerated as well as the healthcare professionals at the forefront of this strange new virus, gathered at the Trade Union Club, in Foveaux Street, Surry Hills to form People Living with AIDS NSW (PLWA NSW). The name PLWA was important. It was not just People with AIDS, but people living with AIDS. We also recognised and welcomed the role of our partners, friends, lovers and loved ones, and the importance of the organisation being here for people affected by the illness as well as those diagnosed with the virus.

The establishment of PLWA in 1988 gave us a platform to work from, on issues surrounding HIV at the time. We mobilised on a number of fronts, political, social, economic and personal: to care for those of us who were very sick, engaging compassionate and specialised care from nursing and medical staff, to overcome stigma and discrimination as we educated the broader community about HIV transmission, and activated politicians and pharmaceutical networks to facilitate access to unapproved HIV drugs overseas.  Early on we recognised the importance of all people living with HIV to be at the centre of the activity, demanding our place at the table: nothing about us, without us.

PLWA become the voice of people living with HIV in NSW supporting and advocating for the rights, health and well-being of all people affected by HIV, including our partners, family and friends. Advocacy, support, advice and information became the first main areas of activity. The first edition of our magazine, ‘Talkabout‘ was published in December 1988. On the 1 November 1999, we changed our name to People Living with HIV/AIDS NSW (PLWH/A NSW) as we began to understand the progression of the virus between those living with HIV and the complexities of AIDS. 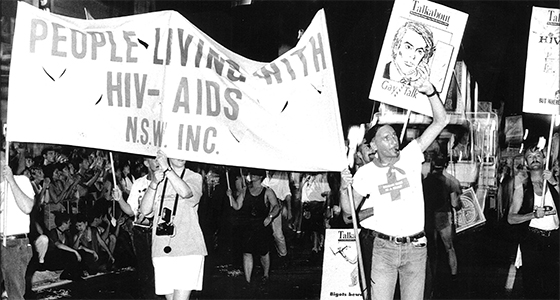 In 1 December 1994, we launched the Positive Speakers Bureau (PSB), an important strategy to speak directly to mainstream audiences and bring a human face of HIV to ‘ordinary Australians’ who were exposed to prejudicial media stereotypes, and misinformation about HIV transmission.

Gradually PLWH/A NSW focused on the two significant turning points for anyone diagnosed with HIV: the day we were diagnosed with HIV and the day we disclosed our HIV positive status to others. Both HIV diagnosis and HIV disclosure have remained two of the highest pressing personal issues for people living with HIV to the present day.

In February 2008, the membership voted to change our name to Positive Life NSW.  We have achieved a phenomenal record of HIV advocacy, often in the face of formidable opposition.  Emerging from a group of volunteers brought together by fear, grief and a desperate need to do something, today we are an accredited organisation working in partnership with the NSW Government, health care and HIV service providers.