This story is about someone who knows himself well enough to accept others for who they are, and is prepared for the best sex possible. 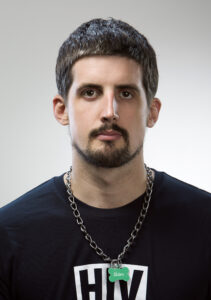 Dan didn’t have a lot of exposure to sex growing up in Adelaide. Now 28, he only started having sex when he was 25.

“I then pretty much got straight into a two year relationship,” he says.

Concerned about HIV, his partner took him to see a sexual health specialist, which began his education.

After the relationship ended, Dan had his first contact with someone living with HIV.

“It happened via an online dating site, but it wasn’t a hook-up,” he says.

“We just met for a chat and he told me about the sort of random messages he gets for being upfront about his status. You should die … You’re a plague upon society …”

Dan was shocked that anyone would treat anyone like that.

“That gave me a glimpse of what people with HIV go through,” he says. “So I decided from that point on that I was going to be open and accepting of positive people.”

This philosophy came in handy when he moved to Sydney just over a year ago.

“I dived head first into the scene,” he says. “And met some pretty awesome positive people.

“I’ve learned a lot since then,” he laughs. “And had some experiences.”

Shortly after arriving in Sydney, Dan did his research and started taking PrEP a few months later.

“Since then, I’ve had condomless sex with HIV positive undetectable people,” he says. “Mostly trusted friends. Not randoms. I still use condoms with randoms because I don’t want STIs.”

The encounters Dan had with positive partners before he went on PrEP always involved condoms.

“And were surprisingly normal,” he says. “They told me they were positive and I said that was fine. And the encounter proceeded like a normal online hook-up.”

Most HIV positive partners he has met online are upfront on their profiles and open to questions.

But Dan is clued up on current science and doesn’t feel the need to discuss the matter further.

“I treat them just like I would any encounter,” he says.

Dan thinks that PrEP has made a huge difference in the lives of people who were afraid to have sex because of HIV. But it hasn’t changed him much.

“I wouldn’t have done that before because even though I trusted them, humans make mistakes. They may not know they have an STI or they may have become detectable since their last test.”

These days, Dan uses online dating sites more as a platform to advocate PrEP. His profile explains that he’s on PrEP and invites people to ask any questions they like.

A few believe he is being too cautious but others praise his decision.

One guy criticised his choice to take PrEP drugs; and relayed his own experience taking Post Exposure Prophylaxis (PEP) drugs after an occasion of sex he was concerned may have exposed him to HIV.

“He had some particularly bad side effects,” says Dan. “And couldn’t believe I would willingly choose to take the medication.

“But we talked about the bigger picture. And how important PrEP was if we are to eradicate HIV.”

Another HIV negative guy contacted him to ask whether he should be on PrEP himself.

Dan has found that there are still a lot of people who don’t know the basics like how HIV is transmitted. But they are not afraid to ask him questions. And he is happy to answer them.

Dan doesn’t see any difference between his HIV positive friends and his negative ones. But he does acknowledge that something probably changes when you become positive. He likens it to the more accepting attitude you find among gay people or other groups who have experienced what it is like to be in the minority.

“I think it’s easier for positive people to be more accepting of sex workers or drug users,” he says.

“They know what stigma is like and so are less likely to give it to others.”

Dan doesn’t take drugs himself but has no problem being around those who do.

“I’ve been in people’s apartments while they’ve been taking drugs,” he says. “Which is fine.”

As a qualified first-aider, Dan would rather people were open with him about using in case something goes wrong.

And how does he feel being with someone who is drug-affected when he isn’t?

“I’m not there to judge their lifestyle choices,” he says.