Fiercely protective of his privacy, Matt struggles to cope with a number of unexpected events. He faces his fears and finds companionship and support in a HIV-different relationship. 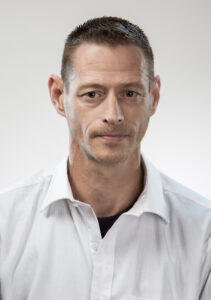 Matt grew up in the eastern suburbs of Sydney. He hated school and left in Year 10 to work in bars and clubs around Oxford Street.

Matt worked hard and made money and lots of friends. He also played in bands and started to make a name for himself as a musician.

“I remember exactly where I was when the news of AIDS broke,” he says.

“It was the early eighties and I was sitting in a share house watching television. There was this news story about a gay disease,” he remembers. “And from then on I thought I probably had it.

Matt’s fear was compounded by the Grim Reaper campaign. “It cemented for me the disease as something to be reviled,” he says.

It wasn’t until the mid-nineties that Matt finally found himself in a situation that left him little choice but to test.

“My partner at the time, Simon, went and got tested and … you know … naturally it was a shock.

“And that is how I found out. It was probably me that gave it to him. I can’t be sure but I’ve always thought that.”

Simon was angry, but their relationship survived and continued for another two years.

“The sex was superlative,” he smiles. “It was the glue that kept us together.”

While he now knew for certain that he had HIV, Matt still didn’t want to deal with it.

“I didn’t want to be the one spotted sitting in the waiting room,” he says. “So, I refused to go to an HIV clinic.”

Fortunately, he found an HIV specialist who supported him and his decision not to treat … until around 2004 when his CD4 count dropped so low that he had no choice but to start treatment.

“Looking back,” he says, “I should probably have started straight away.”

And he probably should but he was dealing with a lot at the time.

A few years before he was diagnosed, Matt was the victim of a violent assault.

“A group of guys attacked me,” he says. “And I was nearly killed.”

He still suffers from post traumatic stress disorder and lists the pills he takes to help him cope.

There’s a pill to help me sleep.

“The two tablets I take for HIV … they’re nothing,” he says.

“One in the morning, one at night. They’re a breeze.

“It’s the emotional scarring that is the hardest to live with.

When his relationship with Simon ended, Matt bounced between regular partners and casual encounters.

“I always practised safe sex,” he says. “But at that point in my life I didn’t want to face a relationship.”

Now well-known in the music scene, Matt was very private about his status. To this day, very few people know he has HIV.

“My sexual health is none of their business,” he says.

“I’m happy to tell the world: I’m gay,” he says. “But I don’t want my HIV becoming public knowledge.”

For a year, Matt used condoms and acted as if nothing was wrong.

Then, one night, Rich said something that pushed a button and Matt told him: “Yes, I’m positive.”

And Rich’s reaction amazed him.

“He was not angry at me. He was completely nonplussed.”

Matt explained that he was undetectable and Rich understood.

“And from that point on he wanted us to throw away the condoms. Which is the complete opposite to what you’d expect.”

Rich has tested a few times since and remains negative.

“Which is a great relief,” says Matt. “The last thing I want to do is infect anyone.”

Matt has had some health issues in the last few years.

“I’ve suffered a terrible loss in libido,” he admits, “Which is frustrating and causes a little bit of friction.”

But the friction is minimal. When Rich spends the weekend they still sleep together.

“We cuddle up but mostly there isn’t any sex,” he says.

Occasionally, he would like to enhance their sex life with chemicals.

“Sometimes I wish I could just organise something for us,” he says, but money is tight at the moment.

Clearly there is a bond between them.

“It’s like a loving best friend relationship,” he says.