In My Own Words: Paul Maudlin 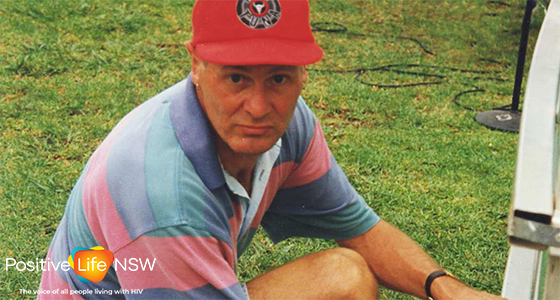 My name is Paul Maudlin and on December 1st 1994 it was International World AIDS Day and also the official launch day for the then PLWHA (NSW) Positive Speakers Bureau (PSB) in Paddington. On that day I was in the NSW central west town of Tullamore, doing the first of what was to become hundreds of speaking engagements for the PSB across NSW over the next ten years.

For almost three years, several Project Officers were employed in part-time capacities to manage the PSB until I joined the organisation in June 1997. Initially I was also employed part-time for two months until August 1997, when I then became the first person to assume a full-time position with PLWHA (NSW) in this role, after suitable funding was secured. I remained in the position until the organisation’s restructure on January 2004, which eventually became Positive Life NSW in 2008.

After my redundancy I relocated to the NSW Central Coast to take up a Sexual Health administration position for the HIV and Related Programs Unit in Gosford, where I have recently retired after seventeen years’ service. However, that’s not the complete story. During this time I was also involved in HIV/Sexual Health support, promotion, advocacy and community development for a local HIV Non-Government Organisation (NGO) and I also found time to teach community service courses for TAFE NSW.

After a seventeen-year absence from Talkabout, I have been invited to write about my 28-year journey as person living with HIV and I will be writing in the next six editions during 2022.

I hope you will enjoy reading about my lived experiences, maybe have a laugh or cry, but more importantly gain some inspiration from these as I did ‘back-in-the-day’ from work colleagues, friends and clients that I met along the way when working for these wonderful organisations.

1993 Part 1: Coming out, disclosure and a terminal event

It was Friday 14th January 1993, seven months after separating from my wife of thirteen years and our two children. I ventured into Darlinghurst after work and visited one of my favourite gay haunts, Kings Steam Sauna in Oxford Street. I hadn’t been there very long when I met Steve sitting, smiling widely beckoning me to enter his cubicle. Before too long Steve wanted us to leave the sauna and go back to his unit in North Sydney. I was eager for more adventure with Steve who like myself was married and separated and likewise had two children of similar gender and ages.

Steve and I also had similar careers, he was a Sergeant in the Australian Regular Army and I had been Chief Petty Officer in the Royal Australian Navy having completed my 20-year engagement in late 1990. I stayed the night and couldn’t wait to return again and so a further visit was planned for the following Wednesday. It was on our second encounter (Wednesday) that Steve disclosed that he had AIDS and wanted to be honest and upfront with me as he felt a very deep attraction for me. I likewise had the same feelings and told him that I wanted to be with him no matter how long that might be. I stayed the night again and subsequently many more nights over the next eight months, until Steve became too ill to remain at home after several hospital admissions. Steve was very close to his family, including his wife who he never had the opportunity to divorce and his two children who adored him.

Before Steve’s health started to decline, we had many good times together, enjoying each other’s company immensely with him telling me it was the happiest he’d been for many years. I concurred with this totally and because of this came out as a gay man at the age of 38, after Steve encouraged me to do so. I attended a Gay and Lesbian Counselling Service (GLCS) Men’s Coming out Group on Saturday afternoons for a couple of months.

In 1987 when I was serving onboard HMAS Torrens, I took a mandatory HIV test prior to the ship’s departure for its three-month deployment to the Far East. I had my second HIV test at Sydney Sexual Health Clinic (SSHC) in May 1993, the day after returning from a short holiday in Vanuatu with Steve. I returned a week later to SSHC and was advised that my HIV result was negative and I needed to return again in three months for follow-up testing. I had what was possibly a seroconversion illness in July and returned as advised for further testing in August 1993. I was given a positive diagnosis on the 12th August 1993 and told that with treatment I could live for possibly 10 years. Ironically on the way to visit Steve at St. Vincent’s that evening I was almost wiped out by an oncoming car in Kings Cross.

I couldn’t get in to see my doctor at SSHC for my results until 6.30pm and was there a couple of hours while I had further bloods taken (I almost fainted, due to not eating all day) as well as having post diagnosis counselling. I wasn’t quite with it afterwards thinking about my diagnosis and whether to tell Steve about it. He was aware I was getting results that day. Despite all of this I needed to see Steve and it was quite late by the time I arrived at the hospital and Steve was asleep.

Despite being very unwell, Steve maintained his sense of humour and mentally was on top of his game. I agonised whether to disclose my seroconversion to Steve, thinking that it was unfair to burden him with such information. The next day after discussing the situation with my counsellor who agreed I should tell him. However, before doing so I also took the extra step of consulting with Steve’s counsellor who sympathised with me and told me ‘He could handle the news.’

By the time I found him in his newly assigned private room in Ward 17S, his parents were visiting, another delay. Once they’d departed, I told Steve what my result was and initially he closed his eyes staying like that for a few minutes. I tried to touch his hand to reassure him that I was accepting of the diagnosis. At first, he didn’t want to talk about it, preferring to sit in silence when once again we were interrupted by a nurse coming into his room to change an intravenous line and feeding bag.

Finally, the next day we got to continue our conversation from the  previous day and we both ended up in tears. Steve said

“I hope you are able to find somebody who will love you the way you love me. I hope that person will also be supportive of you as you’ve been to me.

You’ve got lots of good friends now and you will be alright, you will find somebody.”

Steve went on to apologise for me becoming positive. I responded by telling him that I didn’t want to hear that, as he had nothing to be sorry about, not to me. I then said

“We are both in this relationship together and we accepted the risks.”

Steve died peacefully in his sleep at 9:30am on the 12th September 1993, a month after my diagnosis and fourteen and a half hours short of his 35th birthday while I was on my way to visit him. I arrived at 10:00am to find his sister, brother-in-law and parents outside his room looking very distressed. His Dad simply said “Paul, he’s gone.”

I entered the room with Steve’s sister and together we said our good byes, cuddled each other as the tears were streaming down our faces. I was permitted to stay a while longer with Steve before re-joining the family across the road from St. Vincent’s at the Bandstand Café where we talked about the previous week’s events and how Steve had been visibly declining after being taken off fluids and no longer able to talk, but managed to otherwise communicate with his facial movements, arms and hands.

Yet despite all of this, there was an awful lot of love surrounding Steve as myself, his family and friends came and went that week. While the family and I were at the Bandstand Café that morning, one of Steve’s nurses dressed him in his favourite clothes exactly as he had requested. We returned for the very last time to see him very smartly dressed in black trousers, Tarocash shirt (he loved Tarocash clothing) and his black Army boots which were shined to perfection. I stayed just a bit longer and then left him for the very last time.

Steve had a beautiful funeral service at Parramatta All Saints Church. On the way into the church, I met Steve’s wife for the first time after his two children said hello to me (I had met his children several times beforehand). She introduced herself and was very pleasant with me, already knowing who I was. We exchanged a few kind words with each other while both trying to suppress tears.

The funeral party was organised by the Army with six of Steve’s closest Army mates, three of whom I had met previously. The minister conducting the ceremony had known Steve for 22 years since their high school days and they had also served together in the Army.

Steve wanted the Wendy Matthews song ‘The day he went away’ played inside the church. This was not permitted and instead as Steve’s coffin was being carried out the tune of the ‘Dam Busters’ was allowed to be played. It was very touching.

The second part of the funeral was a private affair held at the Northern Suburbs Crematorium and attended by myself and several of my friends who had come to know Steve during our nine months together, his family and some other close friends. This time his requested song was played – Amy Grant’s ‘I will remember you.’

In the months that followed Steve’s passing I wanted to get my life better organised and concentrate on my work as well as my physical and mental health. From the outset in 1993, I was determined that HIV would not dominate or control my life, however for a range of very complicated reasons that’s exactly what HIV/AIDS did do for the next 14 years despite all of my best intentions otherwise.

I have learnt a hell of a lot about myself and others living with HIV/AIDS since then. For me, life with a ‘chronic medical condition’ such as HIV for such a long time, has certainly been very eventful with many obstacles on so many levels. I am alive and well despite surviving many challenges and feel very privileged to share my experiences with all of you.

In the next edition I will write Part 2:1993 and the period 1994/98 and how it took me almost a year after Steve’s passing to disclose my HIV status to close friends, work colleagues and family. I will also cover the diversity of medical and lifestyle/social support activities I got involved in. These included volunteer work, HIV medical research, studies and drug trials, men’s peer support facilitation, struggles with viral resistance and treatments coupled with AIDS defining illnesses and of course the PSB Project.