What it means to be a Transwoman living with HIV 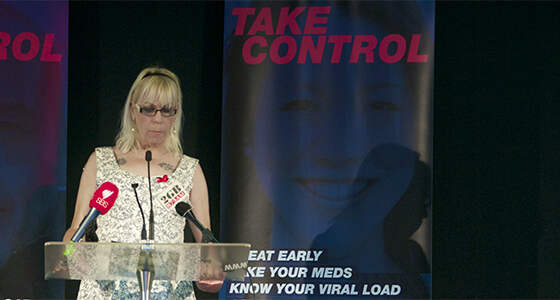 How does one measure the life of an individual? Their hopes and dreams, joys and sorrows. In the roughly five minutes allocated for me to speak to you today, I will do my best to succinctly weave together those events that collectively have led to me speaking to you today.

Anything else, do feel free to come and have a chat with me afterwards.

1. What it’s like or means to be a Transwoman living with HIV.

I was diagnosed in Thailand in February of 2008, as was my long time Thai transgender partner two days earlier. By August I was in hospital with AIDS related PCP pneumonia. My CD4 was 23 and my weight had dropped from 85kgs to less than 50.

I remember the night I was told I was not expected to live through the night. But wake I did the following day. A couple of weeks later, the day after leaving hospital, I got a call at 9am for my partners’ sister, that she had died in a different hospital near her home town. I had lost the only person I can ever truly call my soul mate.

Thus I can adhere to the saying that whatever does not kill you can only make you stronger. For me then living with HIV, I view as a gift, giving me the opportunity to speak to people like you today. And, as a Transwoman, present a largely invisible face in the diversity of people that reminds us all that HIV does not discriminate. Only people do.

I tell you, once you are diagnosed HIV+, your life does change. I can’t stress too much the importance of knowing your status.

Looking around here today I am glad to see up images for the new campaign on HIV awareness and treatment. I was glad to be part of a socially diverse and committed group of people, whose thoughtful and at times critical input manifest in what you see today.

A timely reminder that while treatment and prevention have come a long way since the 1980’s, a cure to HIV remains evasive.

3. My experience and effects of various HIV treatments I have used.

Before the interventionist approach we have today, it was about 10 months when I was prescribed GPO-VIR (Nevirapine-Lamivudine-Stavudine) when I had ‘stabilised’.

“Here take this twice a day”, was the Thai doctor’s comment. No mention of side effects, which began to manifest in bures growing along the bone lines of my extremities and peripheral neuropathy a year or so later. Through self education I learnt these were side effects of the drugs rather than the HIV. For six months I was then changed to a different form of GPO-VIR that contained the now defunct AZT. This was worse.

Since 2010 I have been on the combination treatment of Truvada-Stochrin in a two tablet form, thank you to the Red Cross in Bangkok. And in the one tablet form of Atripla since 2012 in Australia.

An agreeable once a day regime I take with a number of associate meds. Though the creeping neuropathy has left me with little feeling in my hands and feet and with the onset of cold weather, they feel like they are on fire.

Today, 1 December, diverse cultures from around the world will come together for World AIDS Day to show their support for people living with HIV and to commemorate people who have died. The symbol of which is the familiar downward crossed red ribbon. It is my sincerest hope that in the not too distant future, the reasons we come together on 1 December will change.

That on this day, the downwards red ribbon that symbolises why we come together shall be worn reversed as sign of victory over HIV.

A clarion to the world that a cure HIV has been found and as a remembrance of the human cost AIDS has had on humanity.