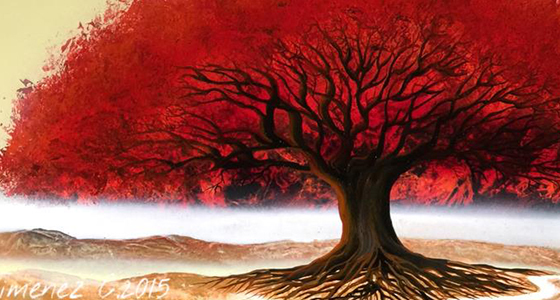 One of my favourite books is The Red Tree by Shaun Tan. The Red Tree is captivating, evocative and inspiring. It’s about a little girl who finds herself depressed, alone and dragged down by life, yet at the end of the book, she finds a beautiful magical red tree in her bedroom, her sanctuary. The imagery and essence of the story for me mirrors my relationship with and understanding of HIV and my health. My HIV trade-off at the moment is medication with better CNS penetration verses insomnia, anxiety, gut problems and weight gain.

My previous HIV medication regimen resulted in year’s disturbed sleep and weight gain. I would be lucky if I slept two to three nights a week for up to seven hours. A typical night sleep was three to four hours of broken light sleep. After continuous disturbed sleep patterns, I adjusted to functioning on a daily basis as if I were walking through a haze. This would trigger regular headaches and migraines and concurrently impacted on my ability to exercise. When my weight became a problem for me, I talked with my doctor and asked for a medication review, explaining what was happening. Around the same time, I noticed I was having problems saying words, recalling the name of things and generally becoming increasingly forgetful. This lasted for about five years.

We chose medication that had better CNS penetration and it took almost twelve months for me to notice a difference and to fully recover from the previous drugs neurologically, having improved sleep and weight loss. Unfortunately, this only lasted two years and I’ve begun to experience similar symptoms to what I had previously. This time however, migraines have been a regular feature, up to three to four a week. What triggered this was a diagnosis of hepatitis C in February 2016. I commenced treatment (Harvoni) immediately and unfortunately three months after treatment completion was unable to achieve a sustained virological response. I had a reaction to the medication and became manic, with a side-order of a protracted flat-affect. Another way of describing it would have been an occasional elevate mood, with a regular dose of fatigue and an inability to feel happiness. When notified of my treatment failure for hepatitis C, I became depressed and withdrawn, isolating from my friends and the world.

Since my hepatitis C viral load reactivated, I have gained weight, suffered insomnia and managed constant migraines. Regular bouts of insomnia have been a constant feature of my life now for more than a decade, I’d be lucky if I can establish a reasonable sleep pattern for up to six months at a stretch. I became dependent on codeine while taking Harvoni, just to manage the headaches and fatigue. I didn’t want to return to my reliance on codeine to manage the migraines so have eliminated processed foods, sugar and sodium, meats, dairy products (but for goats’ cheese and some butter) and reduced my alcohol intake. While I re-introduced regular massages and acupuncture, unfortunately that strategy hasn’t turned everything around. The migraines have ceased, but all else remains. I spoke with my doctor and named my concerns, but the decision was to stay on my current HIV meds, because of the CNS penetration and neurological benefits.

I guess for me, the older I get and longer I live with multiple infections and diagnosed conditions, it all just feels like a balancing act, with regular trade-offs and compromises. I am now in a holding pattern while I wait for the Abbvie pangenotypic meds to be introduced into Australia. Remaining motivated and engaged in my health takes energy, focus and is a full time job.

The little girl in The Red Tree gives me hope and acts as a constant reminder that there is beauty and magic in the world.