When will I need my COVID vaccine booster shot? 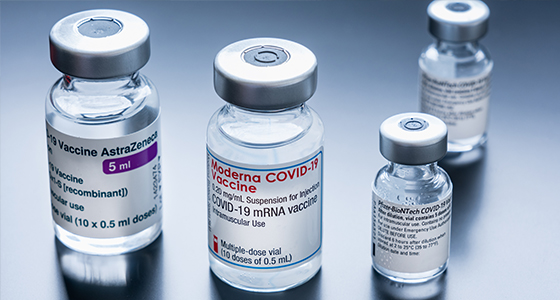 And can I switch to a different brand?

We need to get two doses of vaccine into as many adults as possible — firstly because that helps reduce severity of illness and infection, but also because reaching vaccination targets is likely to bring some new freedoms.

The COVID-19 vaccines (Pfizer, Moderna and Astra Zeneca) continue to be highly effective in reducing risk of severe disease, hospitalisation and death, even against the Delta variant.

But as soon as we finish one vaccine rollout we may need to begin the next rollout of booster doses.

When will I need my booster shot?

First, we need to differentiate between a booster dose and a third dose as part of the initial round of vaccinations. They are two very different things.

Some people who are immunosupressed might need a third dose as part of their primary COVID-19 vaccination schedule. In other words, their third dose comes not long after their second dose and is given to improve their initial protection.

A booster shot is given much later after the initial two dose round of shots. A good example is the way we give tetanus and whooping cough booster vaccines.

There’s a great explainer on who might need a third dose as part of their primary vaccination schedule over here.

For the rest of us, we don’t know for sure when you will need a booster shot. You’ll read lots of different figures on this — six months, eight months, more — and that’s because the research is ongoing. We don’t yet have a definite answer to the best timing for a booster dose.

Pfizer recently announced its research had shown a booster dose resulted an increase in antibodies against the initial virus as well as against the highly infectious Delta variant. These results are awaiting publication and the safety of the booster dose needs to be known. The European regulator (known as the European Medicines Agency) has also started to evaluate an application for the use of a booster dose of the Pfizer vaccine.

We know that there is a decline in antibodies after the primary course and some evidence of waning protection against infection.

In a recent letter to The New England Journal of Medicine, published online earlier this month, doctors and public health experts at University of California San Diego said their data suggested vaccine effectiveness against any symptomatic disease may wane over time since vaccination:

Vaccine effectiveness exceeded 90% from March through June but fell to 65.5% […] in July.

Over time, data will emerge on immune responses and safety after a booster dose.

It may be that booster doses are particularly needed for certain groups in our community — for example, older people or frontline workers. There is also discussion of whether severely immunosuppressed people should get a booster dose from around six months after their third primary dose.

The US is planning to make COVID booster shots widely available to Americans from September onwards, starting eight months after people’s second dose of the Pfizer or Moderna vaccines.

The US booster plan is dependent on the Food and Drug Administration determining that a third dose of the two-dose vaccines is safe and effective, and following advice from the Centers for Disease Control.

Israel’s booster rollout has begun, with people there becoming eligible for a booster five months after their second dose.

no urgent need for the administration of booster doses of vaccines to fully vaccinated individuals in the general population.

Can we mix and match, by getting a different brand of vaccine for the booster?

We don’t yet know for sure.

There may be benefits to getting a different vaccine to the one you first got as a booster. We also know that new vaccines designed specifically to target novel variants are in development and it may be better to receive a booster of a variant-specific vaccine.

It will be worth keeping a close eye on a key trial by the UK-based COV-BOOST group, which is aiming to find out which vaccines against COVID-19 are most effective as a booster vaccination, depending on which vaccine was used to provide the initial primary vaccine course.

This study will give us good information on whether it will be better to get a booster shot that is the same brand as your primary dose, or whether to switch to another.

For example, should a person who initially got Pfizer for their first two doses get an AstraZeneca shot for their booster? Or vice versa? Or should they get a booster of a new variant vaccine?

A trial is underway in the US looking at the safety and immune responses of using a different booster vaccine to the first two doses, but also includes a Beta (B.1.351) variant vaccine.

It’s possible mixing and matching different vaccines might broaden your protection — but the research is ongoing, and it’s too early to say.

Hopefully, supply chain issues for the Pfizer vaccine will improve in the coming months.

The prime minister recently announced Australia has secured an extra four million doses as part of a deal with the UK, on top of extra doses coming as part of deals with Singapore and Poland.

This will help with the rollout of initial doses.

For now, the priority is getting the two doses into arms

Monitoring of the effectiveness of the COVID vaccines will continue, particularly against the delta variant and any new variants that emerge.

Trials are also underway of the safety and immune responses to a variety of different booster vaccines, including the next generation variant vaccines.

In the context of ongoing global vaccine supply constraints, administration of booster doses will exacerbate inequities by driving up demand and consuming scarce supply while priority populations in some countries, or subnational settings, have not yet received a primary vaccination series.

The focus for the time being remains on increasing global vaccination coverage with the primary series.

For now, Australia must focus on getting our primary adult coverage as high as possible in order to protect against severe disease, hospitalisation, and death.