Sharing the recognition with many HIV heroes 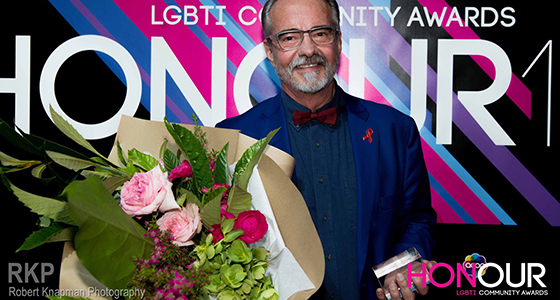 David Crawford received a HIV hero award for three decades of providing service and care to people living with HIV, including a long-running role as a registered nurse at Ward 17 South at St Vincent’s Hospital.

Now a Treatments Officer at Positive Life NSW, David continues to work tirelessly to improve the health and well being of people living with HIV in NSW.

I want to pay my respects to the Gadigal people of the Eora Nation….

What an honour to be nominated amongst such legends in their own right. I helped set up Adahps, Dee, Jenny, love working with you guys. I can’t begin thank every one who put faith in me for me to be standing here now 34 years after my HIV diagnosis and 29 years since starting as a rookie nurse on Ward 17 South at St Vincent’s Hospital in 1989 – it was a war zone – you have no idea.

This is where I began to meet my heroes, the amazing beautiful people, fellow brothers and sisters bonded by one common thread HIV. These young men mostly, some transgender, drag queens and famous people, a few inspiring woman, haemophiliacs all unknowingly were giving me the strength to face what I was going to go through one day. They died showing courage, humour, and an unyielding fight to then endure the unspeakable indignity of their body or mind failing them, for some both. I wanted them looked after the way I wanted to be looked after.

I am a veteran living with survivor guilt, I’ve lived an amazing life and fortunate I can do what I love so much. People with HIV are fighters; we live with the injustice of stigma and experience, its blatant hurtful discrimination forcing us into finding resilience, we are given no choice, while some fall into seclusion, the path of taking substances or of suicide to escape the pain. But thankfully I have those who accept me, love me and support me. I want to share this award with my heroes who didn’t make it. …. Thank you.