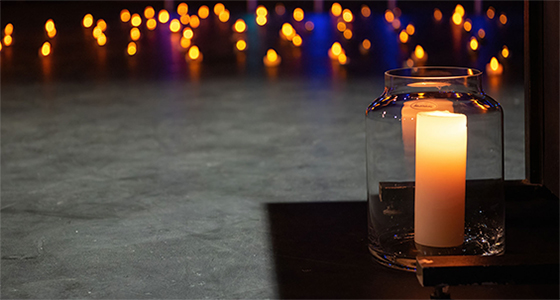 It is an honour to be your Mistress of Ceremonies here at the 2022 Sydney Candlelight Memorial.  I’d like to start our proceedings now by acknowledging that we are on the land of the Gadigal people of the Eora Nation and pay my respects to their elders past, present and emerging. This always was, always will be Aboriginal land.

It gives me great pleasure to welcome and acknowledge our very special guests. Dorrie and Ilana Cooper, wife and daughter of the late much missed Professor David Cooper. As you all well know, Prof Cooper was the inaugural director of the Kirby Institute and friend and clinician to many. Welcome Dorrie and Ilana, thank you for being here.

I also wish to welcome Deborah Giblett sister of my friend, the late Terry Giblet. Terry was the first paid peer and positive man, to be openly employed by ACON to head up their early HIV support project and amongst other life enhancing pursuits for other positive people, he organised the first World AIDS event. In fact Terry’s fingerprints are on many world first initiatives undertaken by and for people living with HIV. Welcome Deborah.

Each year, our communities come together to respect, honor, and mourn the loss of our loved ones. Positive Life NSW recognises this ceremony as part of the International Candlelight Memorial, held across the world on the third Sunday in May every year with the first memorial held in San Francisco in 1983, as we in Australia had not yet seen the awful impact HIV would have on us. In stark contrast, and luckily for us, we had a government, government advisers, community leaders and allied health professionals that understood the reality without which we would not be where we are today.

In remembering the many lives lost to HIV/AIDS including our friends and colleagues, it is also an opportunity to honor those who dedicated their lives to helping people living with and affected by HIV such as the late Professor Cooper and our keynote speaker today Professor Basil Donovan, welcome Professor, and through events such as this, we continue to mobilise our communities in solidarity and keep alive the memories of our dear ones.

I include a special shout-out to all our health care workers, especially at this time of COVID-19, which brings me to the next item on the agenda, our guest speaker. Our very special guest speaker today is many things; from a professional perspective, he is the program head of the Sexual Health Program at the Kirby Institute, a NHMRC Practitioner Fellow who recently reluctantly retired from practice saying goodbye to patients he had cared for since their HIV diagnosis. For a lucky few, before the life-saving treatments were available, he was literally on the frontline of the HIV/AIDS epidemic in Australia, when the first case of AIDS was diagnosed forty years ago.

On a personal level, for many of us, Basil is family and has been there with and for us for all of these years. We have sometimes been naughty children but never a dysfunctional family. We have partied together and mourned together and in between that, got some significant work done. Growing up in the country where his values were established, family is everything to him.

Basil’s collaborative work across a range of policy areas and with minority groups is an intrinsic part of our sex worker rights story. While my peers at the Australian Prostitutes Collective were busy promoting safe sex, so was he and his team but they were also researching and documenting what turned out to be a significant decline in presentations of STIs commensurate with an increase in use of condoms and the role of peer outreach, all of which have been key influencers in policy change. Sex workers achieved impressively low rates of HIV in our industry while advancing decriminalisation. Without this research and in acknowledgment of our role, we may not have been so well recognised. I believe this recognition supported ongoing Government funding for sex worker organisations.

Basil commenced practicing sexual health medicine at the former Blue Light Venereal Diseases Clinic in the Rocks in Sydney in 1979, where I am told the conditions were prehistoric with an open gutter running through the centre of the building to capture the waste!! It was not an area of medicine that most young doctors would even contemplate. It clearly wasn’t a place that women were encouraged to attend!

In the early 80s, he co-founded a specialist sexual health practice in Darlinghurst, so changing the narrative. It was no longer ‘VD clinic’ or another pejorative descriptive terms for the discipline, but ‘sexual health’. Shortly after, alongside his colleagues, he established the Taylor Square Private Clinic which became one of the first HIV specialist practices in Australia at the outset of the HIV/AIDS.

In the mid-80s, he took up the position of Director of the Sydney Sexual Health Centre (SSHC) and was instrumental in increasing the number of dedicated sexual health clinics across NSW and providing opportunities for professional development for a broad cross section of the caring profession. All the while he advanced the cause of sexual health being seen as a respectable profession and area of medicine and allied health services.

Basil wasn’t afraid to get out there, meet and treat people where they were at. That was often in the suburbs, in the brothels. In the days when condoms were used as evidence that the place was an illegal brothel and not a health studio as promoted and all that went with that. During this time, the sexual health of sex workers was, as you might imagine, in dire straits without the ability to protect themselves. Unbeknown to us all, HIV was just around the corner.

Being a part of his team on a number of projects. I remember fondly the 1990 contact tracing project to develop the first contact tracing manual for health care providers, to support people living with HIV, TB and other BBVs. While looking for venues for a national seminar, the Professor said “why don’t you try the Quarantine Station?” I thought he was joking….but really how appropriate and indicative of his sense of humor to hold our seminar in such a place that had witnessed all of the early infectious diseases entering Australia. So it came to pass, a most memorable conference for many. Who can forget or wish to remember the karaoke night!! And the Manual, I think is in its 3rd or 4th edition.

His collaborative work improved relations (and health outcomes) between marginalised communities and their health care providers and set a precedent for others to follow. Under his leadership the SSHC became a world leader in employing peers from marginalised communities, specifically those with sex work experience in health promotion and related roles. This included employing members of the multicultural sex worker community in their research and public health initiatives and activities.

In the mid-2000s, I joined his team again working with his much missed and respected colleague the late Dr. Christine Harcourt and others on the Law and Sex Worker Health (LASH) Projects. The team by then were known as leading international authorities on the public health and legal aspects of sex work, and had been gathering data on prostitution laws in NSW along with a range of other factors for the previous decade. The team was now charged with investigating whether the various legislative approaches across Australian jurisdictions provided different health and wellbeing outcomes for sex workers. I was coopted to co-manage the Western Australian component. I’m thinking, ‘it’s illegal over there, it will not be easy to break into’ and he’s no doubt thinking, ‘who better to send, she’s done it all before!!’ What faith!

In my rush to get the data and meet with some of the grand old dames of the WA brothel business in their final flourish in the industry, I tripped and fell, and broke my elbow. ‘A medical evacuation’, said a friend. ‘No’, he said, ‘she can manage’. Maybe he said, ‘with one hand tied behind her back’, but maybe that was just in my imagination. Anyway I stayed, finished the job with one hand tied behind my back so to speak, and still managed to get to the WA Pride festival that was on at the time.

Wrapping up now, for those who know him, Basil wears his heart on his sleeve and is an ally like no other. All evident in his interview in the 2007 documentary, Rapant: How a City Stopped a Plague, when we were holding on to our emotions, Basil let it rip. When asked ‘what was the most difficult thing he had to face’, the resounding answer, “the relentless deaths of young people before effective anti-HIV treatment became available,” and he considered his greatest life achievement at that time to be “contributing to the control of HIV in Sydney and elsewhere – and surviving (just).” Well I am very glad you did survive Professor! As for how you chose your career path, I will leave that for you to share.

Your friendship, your service and contribution to public health and social justice and the caring of people living with HIV and those at the end of their life is exemplary matched only by your humanity.

I am proud to call you a friend.