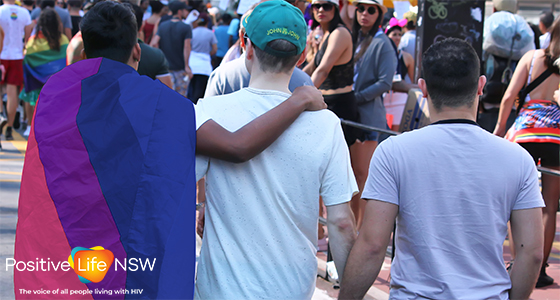 In the late 1940s, broader society learnt of research that demonstrated sexuality is not confined to only two categories: homosexual and heterosexual. This work by Dr Alfred Kinsey, ‘the father of the sexual revolution’ introduced the Kinsey scale, which is one of the first attempts to “acknowledge the diversity and fluidity of human sexual behaviour.” Since then we have also gained a modern and more holistic understanding of human sexuality. After the work of Kinsey in the 1940s came the Klein Scale in the 1970s from the American Bisexual Institute’s Dr. Fritz Klein, which has become another important guiding model for understanding of human sexuality.

Today we are seeing increasing numbers of people identify other than heterosexual or homosexual. We are certainly seeing bi+ people (people who identify as bisexual, pansexual, fluid, bicurious, heteroflexible, homoflexible, and more) take their place in a society that has been dominated by monosexuality (hetero-, and homosexuality) for a very long time. Yet within our predominantly visibly monogamous, bi-gendered society, discrimination and myths about bi+ people persist. While stigma and discrimination are systemic issues within our society, it’s the myths that feed fears, ignorance, even suspicion of bi+ people. I think it’s time to ‘out’ some of these myths.

One of the more pervasive myths surrounding bi+ people, is our sexuality changes (or was never true in the first place) because of the gender of our partner. A bisexual person is always a bisexual person, regardless of who we’re romantically or sexually active with. A bi+ man is not suddenly ‘straight’ because his partner is a woman. A bi+ woman is not suddenly a ‘lesbian’ because her partner is female. A bi+ orientation is not a button that just switches on and off. It’s also not a reason for other people to have concern for the person’s partner. The ‘promiscuous bi person’ is a common myth that undermines an entire population of people.

This leads into another common, and sadly enduring myth. This is one about bi+ men in particular, and places us as the vector of HIV transmission into the heterosexual community. In truth, the transmission of HIV within the heterosexual community is due to a number of factors. In this myth, bi+ men are always suspicious at best, and dangerous at worst. We become convenient scapegoats and this unfortunate legacy lives on today.

I noticed that my bi+ male friends often lack the HIV education of their gay peers. In this way, we don’t get the same tools and knowledge as others and lack some of the best ways to engage with HIV prevention or combat HIV stigma.

It’s no secret that many of our community organisations and health personnel seem blindsided or confused when we show up in a waiting room or call for support. When we are engaged with HIV healthcare, we’re usually grouped in with the men who have sex with men (MSM) group. Worse still, bi+ women and non-binary people are usually forgotten completely or jumbled in with other groups. Female and non-binary partners of bi+ men are often thought to be misled or at-risk when they’re romantically or sexually active with this group.

Is it any wonder that my bi+ community feel a pervasive disconnect from mainstream society? We’re treated as either invisible or negatively queer. In LGBTIQ+ spaces, we’re super-conscious of the stigma of being ‘not-queer-enough’ depending on assumptions about our partner, or thought to be confused or lying if we’re with a same-gendered partner.

Is it any surprise that many of my community experiences atrocious mental health, impacts of drug use, high levels of loneliness, and worse HIV health outcomes than other priority populations? The reality is, bi+ people are ‘enough’. We’re whole people, and undeserving of distrust, suspicion, and ignorance.

As a bisexual man living with HIV, I see these myths and the elements that society has decided to assess bi+ people on, are grounded in exactly the same stuff of HIV stigma. Fear, ignorance, and sometimes hate. This is no way for  us to live, and none of us can stand by while we see others suffer from stigma. All stigma, whether HIV or bisexual stigma and discrimination, affects individuals as well as the community as a whole.

So how can I make a difference? I’m glad you asked! You can reach out to bi+ people and make us feel accepted. I don’t mean stand on a street corner with a sign saying ‘hugs for bisexuals’ or anything like that. I mean treat every person you come across in life that is bi+ with love and respect. Could your friendship group or workplace offer bi+ people some recognition by hosting a small event on Bi Visibility Day (23 September)? Do you have a workplace newsletter that you can invite bi+ writers to write for? Can you encourage your friends to avoid stigmatising language against bi+ people, or steer conversations about queerness to be inclusive of bisexuality?

Let’s create an environment that is accepting of diversity. One of my dreams for the next generation, is to foster a strong community in our mainstream society that treats bi+ people as equal, not as people that are confused, lying, cheating, or dangerous.

If you are a bi+ person living with HIV reading this, know that you are not alone, change is being made, and you are loved! If you want some extra information about these topics, contact local organisations like the Sydney Bi+ Network (SBN) as well as Positive Life NSW, who can provide you support and most importantly community.