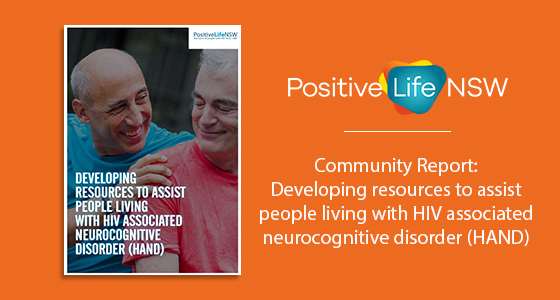 In September 2015, Positive Life NSW conducted a community survey which asked people living with HIV about their concerns and experiences of HIV associated neurocognitive disorder (HAND) with the aim to gain insight into the concerns, experiences, perceptions and ability of people living with HIV within NSW to engage in discussions about HAND with healthcare professionals.

Of the all the people living with HIV who completed the questionnaire, 77% said they were aware of HAND and 52% indicated they were concerned about it. The majority of people said that they were discussing these concerns with both healthcare professionals and their significant others. The majority felt their concerns had been listened to, although those who felt they had not been listened to were less likely to talk about their concerns again because some had received a negative response or were worried about being stigmatised.

Some respondents commented that they are fearful of living with HIV in that it brings an uncertainty of the future. The results of this research have identified five key areas for resource development to assist both people living with HIV to talk about HAND and for healthcare workers, service providers and significant others on how to respond meaningfully when addressing or raising concerns about the possibility of HAND with people living with HIV.