In My Own Words: Rod Smith 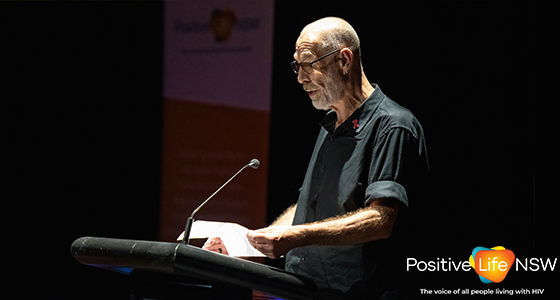 “I’m sure I contracted HIV after a session in 1982,” Rod said. “I can’t prove it, other than knowing what was happening at that time. It was one of my first experiences with S & M. I was curious. My fuck-buddy had just come back from San Francisco, and it was a 24 hour experience with lots of drugs involved.

“So that’s how I knew when I contracted HIV because I remember seroconverting, thinking, ‘oh, this is different.’ But I didn’t put two and two together. After that, I just went off sex and moved out of the city.”

Three years later, Rod was diagnosed with HIV and told he had perhaps three to six months to live. He had just finished his nursing training in 1985.

For the first six months, he remembers thinking over and over again, ‘Oh my God, I’m dying. I’m dying. I’m dying.’ 40 years later, I’m still here,” he says. “After that period, I was basically celibate, there was no sex for 30 odd years. I just didn’t want to transmit HIV to anyone else.”

“Reflecting back, had I known that I would still be here now, I would have bought houses and done all that. But your life gets put on hold, and you’re waiting to die.” Over the next 10 years, Rod’s entire group of friends passed away.

“It became a very isolated world. As I was losing friends, I wasn’t making new friends. So when the last of my friends passed, it became a very lonely world. I moved away from the city and got involved in drugs. That was my escape.

“There were times where I just didn’t want to be here anymore. Especially in the first decade when I lost so many friends and you go through survivor guilt. They’ve all gone; why am I still here? That’s when life started becoming quite bleak.

“When friends were dying and unwell, I was so busy looking after them, cooking dinners, saying goodbye to people and going to funerals.. Then all of a sudden, all that stopped. It was like, Okay, I’m at this sort of crossroads. I don’t know which way to go. Then as time progressed, it was like, ‘hang on, I don’t feel any different. And that’s when the fight began. You know, ‘I’m going to beat this.’

“When I reached the 10-year mark, I became suddenly this new category of ‘long term survivor’. Then when I reached 20 years, my whole way of thinking around HIV was, ‘Hang on, this is not my enemy. This is my companion.’ And I think that’s the difference where I’m at peace with it. Now HIV is my constant companion.

“The first HIV meds that became available was AZT. Prior to that my CD4 count was really high. I did a lot of drugs! I’m quite surprised that I survived all that.” I went on AZT for two weeks. My specialist said, ‘Look, I would recommend it, because it’s the only thing that’s around.’ I can understand coming from a medical model point of view. But at the time, it was like ‘no, my body’s telling me not to take it, and I’m gonna listen to my body.’ So I just said to my specialists, ‘you know what, I don’t like this. My body says, don’t.’ But yeah, I just knew after two weeks. I felt better without it. Best decision I ever made.

“So I was not on medication for about four or five years. Then Don Packham, my specialist, said, ‘look, there’s American study called the Crest study, would you like to be part of it?’ Sure! I’ll be a guinea pig. Within two weeks, I had an undetectable viral load. Prior to that it was beyond measuring.

“When we started getting to more therapies, antiretrovirals and protease inhibitors, I was taking 28 tablets a day. Some had to be taken with food, you had to set your alarm four times a day. It was a real pain in the ass. It was complex and tiring. But I did it, and I stuck with it.

“I just look at how far we’ve come now. It’s one tablet a day for some people. I’m on four meds now, two twice a day, the other two once a day. In terms of my health, apart from the odd little issue, and for my age, I think I’m doing okay.

“Then we had the combination therapies, which made things a lot more simple. Currently, my viral load is undetectable. My CD4 count is over 1200, which is bloody brilliant.

”I had a few issues over the years like peripheral neuropathy, osteoporosis, facial lipoatrophy (that was from a drug called stavudine). That stopped me wanting to re-engage with my gay community. I just looked in the mirror and just saw this skeletal face and everyone was saying, ‘Oh, he looks sick’.

“I was living with my two best friends who were gay. I had some straight friends but this social world was all drug related. I wanted to move away from that lifestyle. Then it was a conscious decision: I needed to get back to my community.

“As luck would have it, I went along to a Seven to Nine meeting with Hedimo. Thank you very much Positive Life! That was a major shift in my life. It took me a few attempts to actually walk through the doors. I’d go into town and then, ‘nah!’ I go back home again and feel really frustrated.

“When I finally did go through with it, I was met with such warmth from the group! That was me reconnecting with the gay community, and of course, that’s where I met Andrew. We’re in a sero-discordant relationship and we’ve been together 11 years now.

“I started volunteering with the Needle and Syringe Program (NSP). Andrew was the team leader. After he moved to NUAA, Nic Parkhill from ACON said ‘we want to appoint you to the role of Coordinator’, so I’ve been the coordinator now for six years.

“Attending my first Candlelight was very powerful. I had never been. It wasn’t that I wasn’t interested in going, but it just brought back too many memories of the early days and the loss and the grief. Back then, you reached a point where you can’t cry anymore. You are just all teared out. It was very desolate.

“For some reason, I think it was the fact that February was my 40th anniversary. And I thought this is the time. When I was asked to read names, I thought ‘Okay. Yep’.

“That photo [on the Talkabout Cover] is beautiful. I used it on my Facebook as a very poignant moment. Soundcheck. Empty seats. It actually represented the loss. It was really symbolic. It was a very powerful day. Thank you for letting me be a part of it.

“The names that I read out, there was no one I knew! But when other people reading, I was ‘ah, God I remember partying with you.’ But they weren’t sad memories. They were actually joyous memories of our days partying. So while there was a sense of solemness to the event, in here my heart was actually singing.

“The first 20 years, we had good times, but there were bad times as well. Drugs became my therapy. At the time, I thought well, I’m gonna bloody well die. If I get a bad result, I’ll give it up. I didn’t.

“Even in the depths I was never suicidal, but I was a risk taker. I would push boundaries. Now, I think, ‘God how the hell did I get away with it?’

Now I lead a pretty sedate sort of life. The work that I do is relevant to my situation. ‘I think working at the NSP, it’s almost like destiny, one of those things meant to be. Meeting Andrew, who became my boss, then we became partners. We have a very loving, supportive relationship. So, my life is blessed. I’ve always taken the time just to smell the roses.

“I think it’s also about surrounding yourself with the right people. In the past 20 years, I’ve been surrounded by good people. It’s nice reaching my age, I can look back and think, ‘well, it’s been an interesting life!’ Where I’m at now is a really good place.

“Now at 40 years [living with HIV] is a whole new chapter for me. Still, I think day by day. I live for the moment, yesterday is gone. Tomorrow will be a new day, I can’t plan five years down the track.

“Yes, I made some bad choices in the years gone by, but it got me through. It allowed me to survive. And people can say, but you were taking drugs? Well, absolutely. Which is now why I work in Alcohol and Other Drugs. It’s like, been there, done that.

I’m quite open about my past track history at the NSP. I’m not talking out of a textbook. I’m talking from lived experience. Oh, you’re one of us! I’m so proud of our needle and syringe program. It’s different, it’s more holistic, and we look at the whole person. We remove stigma, we remove judgment, and we’re working with some of the most marginalised, vulnerable people in our community. They come into our service, and they leave knowing they’ve been seen and heard. Andrew’s my great mentor, he’s brilliant in the industry. The staff that I have are all amazing people.

“I’m quite open about my HIV status. Why not? I’m not ashamed of it, I don’t see it as a something to be ashamed of. Back from those early horrific days, someone asked me, ‘So, what was it really like?’ And I said, there’s only two words that describe it. Absolutely terrifying.

Postscript: Rod Smith works out of the Needle and Syringe program (NSP) in the foyer of 414 Elizabeth Street. He has endless time and compassion for people who inject drugs. People can pick up a full range of injecting equipment as well as condoms and lube, free and single use, including accessing 24-hour disposal bins and finding out where there are sharps disposal locations.