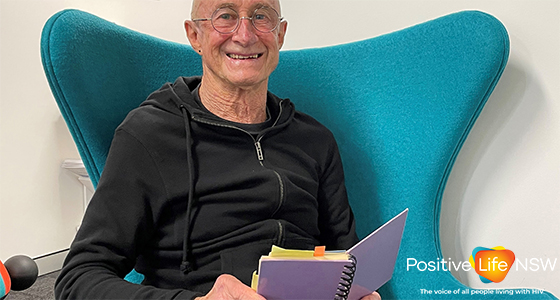 Garry Wotherspoon has been an academic, a political speechwriter, an historian, an author, and a close observer of gay life in Sydney. He is both elder and activist, and a chronicler of the gay community’s lives, with half a dozen books published. This is his story, in his own words.

Growing up in Sydney, I was lucky enough to be exposed to the city’s counterculture in the 1960s. As a generation then, we had good jobs, with good income and opportunities, so we could afford to move out of home, and experience freedoms early.

This was not long after the Police Commissioner had announced that the two greatest threats to Australia were Communism and homosexuality, so we learned to live a discreet, secret life. I worked in a bank and then did postgraduate studies, which led to me being offered a job at the University of Sydney. The old Merewether Building there was ‘Gay Central’ in the 1970s. It was a wonderful time, with people like Dennis Altman, Lex Watson and Sue Wills nearby. We could pursue gay studies, but it was the gay political activism that mostly involved us, initially on law reform. And then, in the early 1980s, with the advent of AIDS, we switched our focus to deal with it and its repercussions.

I had been in a long-term relationship from 1980, an open relationship, and we’d negotiate safe sex with outsiders.

My partner had been born in South Africa, and in 2002 we went to live there, initially for a year, but we quickly realised it wasn’t going to work for us. We broke up soon after we came back to Australia, and some time after that, I went to a sex-on-premises venue, smoked some marijuana, and was having a good time. In those days we all had a vial on a leather thong around our necks for our amyl – easy access. By the end of the evening, I was having a very good time, but wasn’t really paying much attention to the safe-sex necessities any more.

It was some weeks later that I started to feel ill. I went to my GP at Taylor Square for blood tests. It was early 2004 and the results came back; I had joined the HIV tribe.

The doctors there, Ross Price and Robert Finlayson, put me in touch with Positive Life, where I did the Genesis program with other people who had recently seroconverted. They were of a diverse collection of backgrounds and ages: I was in my sixties, and there were others in their twenties.

Genesis was designed to acclimatise you to the fact that you had seroconverted. After that, I did the After Hours program, run by Glenn Flanagan at Positive Life, one evening a month, where we swapped stories about how to live with HIV and create a worthwhile life. They were also quite a diverse group, and I have friends from that program who I still see.

People adapt differently to the diagnosis. I was lucky, I always had other interests that kept me busy, and an extensive network of friends, so HIV didn’t come to dominate my life as it did for some people… there was one person at After Hours who kept referring to the ‘Immaculate infection’, and it had become the obsession of his life.

I take my pill every morning; it’s just modern life, although in the early days I was taking four or five tablets a day. We’re very lucky to have the advantages of modern medicine and its technology. My Taylor Square GPs give a lot of support with my pills.

I bought an apartment in Oxford Street in 2007, and I used to buy a newspaper downstairs every morning. I noticed a hunky man from the building next door, who I saw most mornings in a suit, off to work in the city. Eye contact was made! One day he was in a t-shirt and shorts, and I asked him why the change; he said his contract was finished. I asked if he would like a coffee; no, he didn’t drink coffee.

So then I offered him herbal tea – and me. I was open about my sero-status, and he said it didn’t matter to him, and serendipity, we’ve been together ever since. Of course, there is still stigma attached to HIV, and you have to be cautious about who you come out to, because it can impact your life. Be honest among your friends, because if they reject you, they aren’t really your friends.

Looking back, it wasn’t exactly a relief when I was diagnosed; it was more of a sense of an arrival; I could stop worrying about whether I’d get HIV – I was there now. But I also knew I wasn’t going to die from it.

After a diagnosis of HIV, you still have a path in life, and it need be no different to what you envisaged it might be. These days you’re more likely to have trouble with high blood pressure or diabetes.