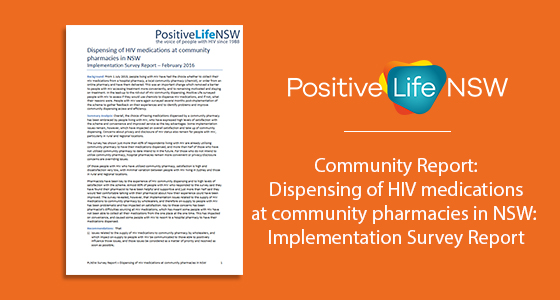 In the lead–up to the roll–out of HIV community dispensing in 2015, Positive Life NSW surveyed people living with HIV to assess if they would use chemists to dispense HIV medications, and if not, what their reasons were. Several months post–implementation of the scheme in February 2016, Positive Life again surveyed people living with HIV to gather feedback on their experiences and to identify problems and improve community dispensing access and efficiency.

Overall, the choice of having medications dispensed by a community pharmacy has been embraced by people living with HIV, who have expressed high levels of satisfaction with the scheme and convenience and improved service as the key advantages. Some implementation issues remain, however, which have impacted on overall satisfaction and take up of community dispensing. Concerns about privacy and disclosure of HIV status also remain for people living with HIV in NSW, particularly in rural and regional locations.