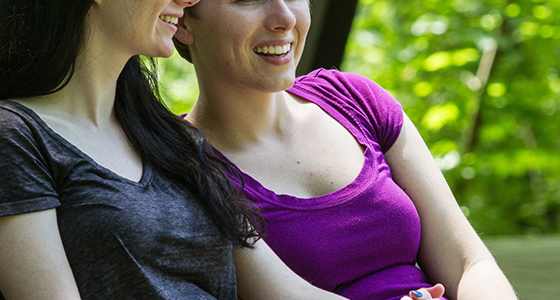 Women living with HIV face unique challenges within the Australian context for a number of reasons. Firstly, we are not seen as a priority group for contracting HIV, so we are not routinely tested and don’t receive targeted education for women. Secondly, many of us are unattached to the gay community and our support networks have no awareness or understanding of HIV. Women account for about 10% of people living with HIV in Australia, so our minority status and lack of community attachment makes us particularly vulnerable to isolation. Lastly, disclosure is often a serious concern and a major hurdle for women living with HIV.

When I was diagnosed in 1997, I received conflicting messages about HIV and disclosure. The look on my suburban GP’s face who diagnosed me said plenty. “I’m sorry”, he stammered. “You don’t look like the type.” He referred me on and swiftly ushered me out of the appointment. The message to me was clear. If a doctor was so obviously uncomfortable with HIV, how might others react?

Though my parents were very supportive, I was cautious with disclosure. “It could happen to anyone,” they said as they hugged me. Others told me not to tell anyone else. Another friend said it might be a quirky thing about me that people might find attractive! I was skeptical. I didn’t know how a sexual partner would react. Without any example of disclosing HIV, the first thought on my mind was, what might people think of me as a young woman living with HIV? I was also acutely aware I would be breaking the law if I engaged in any kind of sexual activity without disclosing my HIV status.

The sexual double standard that women face rests heavily on the shoulders of women living with HIV. Most women try to avoid being labelled promiscuous, which is not a concern generally shared by men. One comes to see the hypocrisy in society about sex. For women living with HIV, the association with so-called ‘bad behaviour’ (like sex and drugs) can be frightening and overwhelming. It takes a lot of strength to maintain confidence and work through issues of judgment, dignity and respect.

In the collective psyche of many cultures, the notion of women as dangerous witches, whores and sirens lingers on, and women are keenly aware of this. No woman wants to be called a slut (unless she has worked through this and embraced it as a positive). Even then she may experience stigma and discrimination. History is full of stories of the Scarlet Woman and the fate she endures. When a woman is diagnosed with HIV these fears can be compounded and many keep their HIV status a secret.

The threat of violence is a reality most women are conscious of. Women grow up aware of their surroundings and their safety, and many have daily strategies to avoid violence and being attacked or raped. When a woman living with HIV contemplates disclosure, the possibility of violence often becomes an issue. I read recently of two reports in the USA where women were killed by men they were romantically involved with, after they disclosed they were living with HIV. Other countries are not much better.

Happily, I have never experienced violence from men after disclosing to them. Yet, it still poses some anxiety for me and I am also prepared for the possibility of an angry or frightened response. I have disclosed many times and I never encountered a heterosexual man who knew the current facts about HIV. Most quote ‘the Grim Reaper’ as their only memory of HIV and these are university educated, professional men, some with a science background. If I had not been well informed, confident and able to reassure them, the disclosure probably wouldn’t have gone well. As women living with HIV, managing to feel sexy and desirable, rather than someone they have to look after emotionally or physically, is an added challenge.

The recent amendment to section 56 of the Public Health Act in 2017 that a person with HIV doesn’t need to disclose provided their viral load is less than 200, they use condoms, or can confirm their partner is on PrEP, relieves some of the pressure to disclose. However, it also has created more confusion and ambiguity. Telling a man after you have had sex with him is undoubtedly a risk. Bearing in mind he is unlikely to have much knowledge about HIV, his reaction could be unpredictable. Telling him before sex may be a preferred option, but this usually means a lengthy education process ensues (if you are able to articulate it and he is willing to hear it), rather than the hot time you were hoping for. When to tell, is often an issue with HIV disclosure.

All these concerns of disclosure, violence, timing, and education can inhibit a buddying sexual relationship, and cause women living with HIV to shy away from emotional intimacy or to self-sabotage their relationships. I remember getting close to a guy before disclosing, and the more my feelings developed, the harder it got to tell him I was living with HIV. Eventually he concluded that I didn’t like him and the relationship ended with both of us hurt and confused. It was a painful lesson.

The fact that HIV transmission is now proven to have a Zero risk when a person living with HIV is on effective treatment, is an excellent development. We can now be just like any other woman, except there is just this one thing I need to tell you…