When I contracted COVID-19 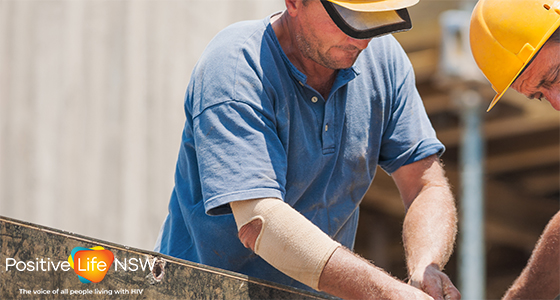 Four years ago at the age of 27 , Benny was called to back and chat with a social worker after having his usual routine testing for sexually transmitted infections (STIs). Finding out that he’d tested positive to HIV shook his world.

“At the time I thought it was a bit of a death sentence,” remembers Benny. “I was very uneducated about it.” He clearly remembers the news clouding his ability to absorb extra details.

“I could only take in about 60% of what they said, because it was a huge shock,” he said. “It turned things upside down; I remember a couple of weeks before, I’d had this flu, where I lost heaps of weight, couldn’t eat, couldn’t operate. I thought it was a bit of depression as well.”

Benny started HIV antiretrovirals shortly after. “When I first started taking it [HIV medication] I was able to sleep; I hadn’t been able to sleep for twelve or fourteen hours in a very long time.”

He recalls this time as a difficult time of adjustment. “I found it very hard to function because I had no self esteem; I was just gutted. I had in my head that I couldn’t do this, I couldn’t do that. There’s a huge stigma. That was one of the elements of me going into rehab.”

After coming out of rehab, and some changes to his HIV medication, which took him around four to six weeks to get used to, he incorporated the regular medication into his routine, and life went on.

In August 2021, Benny was in COVID lockdown. Living in a Local Government Area of concern and not permitted to work, he was eager to get back to his usual employment in construction. As soon as he heard the NSW Premier announce that workers who “get the jab” could return to work, Benny fronted up to his local pharmacy to get the first of two COVID-19 vaccines. “My work’s policy was that you had to have the jab in order to go to work; I was like, okay sweet.”

It was part of his return to work, as he says, “I gotta get the jab, gotta get a test.”

He returned home after the COVID-19 test. It was then that the sweating started. “I remember saying, I’ve gotta go to bed. I thought I’d just grab a short nap. I slept for about sixteen hours.”

He woke to a phone full of missed calls and messages. Still somewhat confused in a sleep-filled haze looking through these, the phone rang.

“I answered,” he said. “It was the contract tracers telling me I’d tested positive to COVID.”
By this time, he hardly needed to be told something was very wrong. Benny felt terrible.

“It wasn’t just one symptom at a time,” he says. “I had a high fever, and [I felt] like I was freezing. Then I’d be hot, and I’d be cold, and I had a cough.” His symptoms worsened.

Four days later, Benny called the ambulance. He recalls “when the paramedics rocked up, I walked downstairs from my place out to the front of the ambulance, I had to sit down, and she [one of the paramedics] looks at me and I was like I just [got] out of the shower. I was that wet. She’s like ‘oh whoa!’ The sweat just rolled off me.”

He noticed another symptom had started. “I don’t know if you had a skateboard or a BMX as a kid and you scraped your knees. That’s what my lungs felt like. When I told the paramedics this, they said, you need to go to hospital.” Benny also started realising his memory seemed affected. “Another symptom of COVID is mental fog; you’ll be going to pick up a book off the shelf but you forget what you’re doing. That kept progressing.”

After he was admitted to hospital, Benny was on a COVID ward for six days. It was here the gravity of his situation really started to sink in.

“At this point, all your health care is taken out of your hands. All you can pretty much do is go to the bathroom.”

After six days, Benny was transferred to Special Health Accommodation because he was unable to return home. His flatmate had contracted COVID as well. Now in isolation, Benny says, “I started to notice that the symptoms weren’t in sequence [any more], I started getting really strong single symptoms.”

In Special Accommodation, he noticed how much physical muscle loss he had. He recalled, “My calves were bigger than my quads!” Isolated from everything, he reflected “It’s not a great experience. Fatigue. You can’t engage, whether it’s muscular or mentally.”

“I also had trouble breathing. It’s like someone’s giving you a bear hug, kind of like being winded, but [the air’s] not getting in there. I knew it was serious. At the same time, I’m trying to keep as positive as possible. It doesn’t really help when you go to the hospital. You find out how quickly other people deteriorate.”

While he’d started with medication and oxygen, Benny was fortunate enough not to need ventilation. His clinical team told him that COVID had affected his heart more than his lungs, “so they were putting me on heart medication [but] it was exacerbating the situation. One of the side effects of me having COVID is an elevated heart rate. But that slowly [went away], so now it’s not as strong.”

Eventually after four and a half weeks in isolation, Benny was discharged home to slowly regain his health and strength. “Once I got out [of hospital], I knew straight away I wasn’t able to work, purely because of the state of my body, and also mentally.

When I got home, I took it really easy and I slowly started going for walks. I was [able to do] about fifteen percent of what I was doing before and I was cracking up a sweat.”

After about two and half weeks, he was cleared to return to work.

“I did a shift back at work. They started me off on the machine and then they slowly worked me into it. A lot of the sites in the city require a mandatory COVID test in order to gain entry to the site. I couldn’t provide that because if I get tested, I’ll come up positive. Now that I’ve actually been reinstated back into work as of today, I’m really happy about that.”

It was back in the workplace, that Benny started to become aware of a familiar challenge: stigma.

As a person living with HIV, Benny had felt his fair share of HIV stigma and discrimination. “Through going to work, I’ve noticed stigma, as in people don’t want you around, people don’t want to talk to you. You get the stigma. And it’s really driving me up the wall. People will try and stand back when they talk to you.

“There’s people who are really open minded, they’re all right with it. Then there are individuals who are close minded. When people choose not to be educated on this topic, it’s like talking to a brick wall. And there’s so much misinformation about this stuff.”

“I’ve told close friends that I’ve had it. And they were cool about it, because they know me and I’ve noticed within my friendship circles, everyone’s open-minded but I’ve also seen the other side, a bit of an ugly side.”

Normally a straight shooter, when Benny started to suspect he might not be getting some of the work allocation because of his run in with COVID, he asked them straight out. To their credit, he got an equally direct answer. “Yes it is.”

Despite this, Benny says, “My work team and bosses are all cool. I reckon with the state of where COVID is now, everyone’s starting to realise that we’re at the point we have to live with it. I’m the first person from my employer who’s actually come back from having COVID and is working. I’m a bit of a guinea pig. The interesting thing is that [HIV] has more privacy rules around it than COVID.”

Benny says he only knows of four colleagues in his industry who’ve contracted COVID. He says one of his workmates “is really stressing out because his missus was eight months pregnant. So he’s pulling his hair out, which is understandable.”

He shared about another colleague who also had a similar experience. “He was quite fearful of leaving home. It was tough for him to get out of the house, because it can lead people down a bad path, mentally. Not connecting with people.”

Keen to get himself back into peak physical condition, Benny focused on getting himself back into the gym. “Construction is hands on,” he said. “The first day I went back to the gym was a real eye-opener. My physical well being is pretty much having my goals sustained towards the gym side of things.

While getting physically back to normal, Benny acknowledges, “I still have the brain fog. I also have a history with PTSD so I have a system in place of engaging with the trigger.

I could imagine if an individual didn’t have that previously, that could be quite challenging because it can either take away self-esteem or it can make you second guess yourself or be a trigger for something else. You go through the phase of being like you’re not you, not really disabled, but you’re not yourself.”

Aware that the lessons learnt from the HIV epidemic have informed the NSW response to COVID, Benny philosophically looks at HIV as ‘a bit of a front runner’ to COVID.

Conscious of the impact that mental health and well being can have on his life and especially employment, Benny says, “I’ve definitely noticed I have a different outlook on life in how I interact with my day-to-day life.”

“My mental well being, that’s for me to keep in check. After all, my happiness is me, type of thing. That’s up to me if I want to be happy. I’ve taken it on board, and I came to the conclusion that I have to implement positive structure around it in order to move forward.”