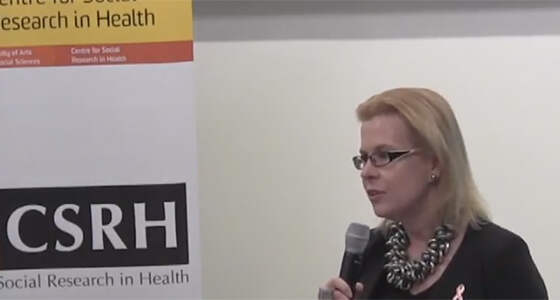 Before we begin this afternoon, I would like to acknowledge the traditional owners of the land on which we meet, the Gadigal people of the Eora nation, and pay my respects to their elders, past, present and future.

My name is Jane Costello and I am the President of Positive Life NSW.

I want to begin this talk by stating upfront, that HIV infection remains a difficult and shocking experience for most people who receive a diagnosis. Many of these people encounter ongoing challenges in life as a result. However they also meet, and overcome those challenges in resilient and creative ways that offer inspiration to others, including to other people living with HIV.

HIV is manageable and it must be acknowledged that living with HIV in 2014 is very different to what it was like in the 1980s. The impact of HIV-related stigma and discrimination is a differential experience however, which varies from individual to individual, context to context. And as such, it is difficult to discuss HIV-related stigma in generalisations.

Since the earliest days of the epidemic, HIV-associated stigma has been recognised as a serious and debilitating feature. It has also been recognised as a major obstacle that inhibits prevention and access to treatment and care, but I’ll come back to this point a little later.

There are a number of reasons why HIV is stigmatised. It is a serious communicable disease;, it is linked to sex and drug use; there is a hangover and community memory of the shocking consequences of HIV from the early days; and it overwhelmingly affects most populations who are already socially marginalised.

In 2010/11, the National Centre in HIV Social Research (now CSRH) in collaboration with NAPWHA, the National Association of People With HIV Australia, conducted an investigation into HIV stigma. They focused on the experiences of people living with HIV in relation to HIV related stigma and discrimination. Although results confirmed the experience of HIV stigma among the study sample, it could be described as moderate rather than severe. On the whole, women and heterosexual men tended to report higher levels of stigma than gay men, and the entire sample reported higher levels of felt stigma rather than enacted stigma. This was either described as a perception of others’ negative attitudes or as feelings participants had about themselves.

The difficulty in addressing perceived slights or negative attitudes of others is that it is difficult to always say whether these perceptions arise in response to something real or not. The reality is that most explicit stigma or discrimination is generally considered socially unacceptable. This fact may be a sign that attempts to combat HIV stigma and discrimination towards people living with HIV, may have had some degree of success in Australia.

The fact that explicit discrimination is relatively rare can be counted as an accomplishment stemming from decades of effort put into enacting anti-discrimination legislation and creating cultures of equal opportunity. It is nonetheless doubtless true that some individuals in society do retain stigmatising beliefs about HIV, and some people living with HIV have highly attuned senses for detecting these attitudes. Their subtle nature however, often makes them almost impossible to question or challenge.

While it may be difficult to combat and change these attitudes in others, it may be more realistic to consider how these messages are received by people living with HIV. This is why the idea of resilience is so appealing. It offers a way to abate the power and negative impact of stigma.

The negative feeling and attitudes that people living with HIV hold about themselves, is worth examining. Because the transmission of HIV is primarily linked to sex or drug use, many people living with HIV internalise negative beliefs about themselves and therefore live lives of guilt, shame, fear, self-rejection and self-loathing. The metaphors of ‘dirty’ or ‘unclean’ to describe how HIV makes some people feel were found to be strikingly common in the study. The fact that some of the most stigmatising attitudes and beliefs about HIV are held by people living with HIV, means that mounting campaigns to influence the broader population may be unlikely to address the problem. Challenging negative beliefs that people with HV hold about themselves would seem to be a more effective pathway to peruse, particularly challenging the self-stigmatising beliefs of being ‘dirty’ or ‘unclean’ because of HIV, and thereby building personal resilience.

Then, there is the issue of the criminalisation of HIV, non-disclosure, exposure and transmission. The overly broad application of criminal law to HIV non-disclosure, exposure and transmission, raises serious human rights and public health concerns. I believe that we need to concentrate on expanding the use of proven and successful evidenced–based and rights-based public health approaches to HIV prevention, treatment and care, and to limit the application of criminal law to the intentional and malicious transmission of HIV cases where it is needed to achieve justice. We need to strengthen HIV programmes, and empower people with the knowledge that enables them to protect themselves from HIV and to avoid transmitting it, and we need to help people to access the services they need for HIV prevention, treatment, care and support.

We also need to accept that HIV infection is now a chronic treatable health condition. It is inappropriate for criminal prosecution of HIV non-disclosure, exposure or transmission to involve charges of inflicting grievous bodily harm. The fact that the law continues to represent non-disclosure, exposure and transmission in such a serious and exaggerated way misrepresents the impact of HIV infection, and stigmatises people living with HIV as well as hindering public health programs.

So how does stigma affect HIV prevention and treatment?

HIV stigma adds to the stress experienced by people living with HIV, whether HIV is diagnosed or not. In addition, it leads to challenges in HIV prevention efforts. Fear of the negative social consequences of an HIV positive test result can deter some people from getting tested. Studies in the US have found that stigma is associated with a decreased likelihood of being tested for HIV. People who are HIV positive but haven’t been tested and don’t know they are HIV positive, are less likely to try and prevent transmitting HIV to others.

Some HIV positive people may fear that disclosing their HIV status may bring partner rejection, limit sexual opportunities and increase the risk of social and sexual isolation. Stigma surrounding HIV, sex and drug use make it difficult for HIV prevention services to be maximised. While it is accepted that HIV prevention should be integrated into the broader health and community contexts, many parts of the community such as faith-based institutions, businesses, prisons and schools have resisted having frank discussions about HIV.

Stigma can also negatively affect the health and wellbeing of people living with HIV. HIV positive people may disengage from health care and not seek treatment; or delay going to a doctor due to real or perceived discrimination against them; and the fear that HIV infection will need to be acknowledged not only by them, but by their partners, family and associates. This may particularly be the case for people living with HIV who are heterosexual, bisexual or who come from Aboriginal and cultural and linguistically diverse communities where knowledge and acceptance of HIV may be limited. These persons may not have an adequate support network because they fear that friends or family will abandon them, or suffer the same stigma as they do.

Studies have found that for some population groups with high levels of internalised stigma, these populations avoid seeking testing, treatment and care because they are afraid of disclosure, and see themselves as unworthy of receiving support. Experiences of social rejection, disapproval and discrimination connected to HIV may decrease the motivation of people living with HIV to stay healthy, to seek treatment and care, or to remain connected to health care services. Those who experience stigma are also likely to miss clinic appointments and lapse in adherence to their medication. These factors have repercussions for efforts to maintain health and reduce individual and community viral loads, and prevent onward transmission.

We live in a new era. Knowledge about HIV prevention, transmission and care can offset the stigma that is caused by misinformation and ignorance. Education programs are needed in many areas and populations, and will continue to be needed for successive generations of young people, if we are to achieve the goal of eradicating HIV by the end of this decade.

Stigma exists not only within individuals and their actions, but within broader social and cultural contexts that need to be addressed. Organisations and communities must tackle the values, norms and moral judgements that contribute to the stigmatisation of HIV positive people by faith-based institutions, businesses, lawmakers and opinion leaders. Policymakers need to consider the potential consequences of legislation to ensure that they don’t inadvertently increase HIV-related stigma and discrimination, and undermine public health initiatives.

We must involve people living with HIV in the designing, running and evaluation of education and stigma reduction programs. These programs can offer cultural competency, confidentiality and awareness training for healthcare workers, counsellors and staff at social service organisations including drug treatment, housing, mental health and community and residential aged care services.

HIV-related stigma is unlikely to go away any time soon. But as new knowledge and understanding about the reality of infection with HIV becomes more widely understood, it is hoped that the enacted and felt stigma will reduce, and so too the impacts on people living with HIV. But to achieve these potentials, we’ll need to step back from a necessity to dramatise an HIV diagnosis into something more than it needs to be. The HIV sector is complicit in this behaviour and it’s unhelpful. It’s a controllable virus and we need to get real about that!

If you happen to be infected with HIV in Sydney in 2014, chances are you’ll go onto treatment within six months, have an undetectable viral load pretty soon after, and live an unremarkably normal life – with a job and a partner, friends and family who love you. Continuing to dramatise infection with HIV into something more, may suit some involved in implementing the HIV response who see the value in HIV related stigma as a preventative mechanism, but it doesn’t represent the modern reality of living with HIV. And it increasingly won’t…