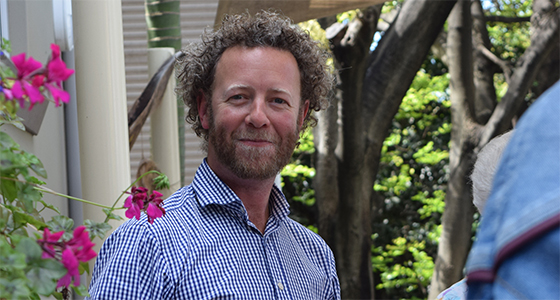 A self-described child of the 70s, Health Services Manager Cameron French witnessed the early days of the HIV epidemic in Sydney during the 80s and early 90s. Those devastating days crystalised his passion for the care and support of people living with HIV, especially those who experience, or are at risk of, homelessness.

These days, Cameron manages two significant accommodation services for experiencing or at risk of homelessness and/or who are living with HIV: Stanford House and Tierney House, both of which function under the stewardship and oversight of St Vincent’s Hospital since 2016 and 2012 respectively.

“Stanford House opened in 1991 as an NGO for people living with HIV who were experiencing homelessness or at risk of homelessness,” says Cameron. Originally owned by the Daughters of Charity of St Vincent de Paul in Stanmore, alternate arrangements were required by 2014 to safeguard the long-term survival of the service.

Tierney House was established in 2012 by St Vincent’s Hospital, in partnership with the NSW Ministry of Health and philanthropic input, as a response to people experiencing homelessness, who are presenting with a primary sub-acute physical health complaint, more often than not to the St Vincent’s emergency department (A&E). “Unlike others in the community who have an ongoing relationship with a GP, those experiencing homelessness tend to see the A&E as a kind of a GP service,” said Cameron. When people experiencing homelessness and/or are living with HIV from this itinerant population are admitted to hospital for care, the discharge process becomes more complicated without established housing.

“Where patients are normally sent home with a discharge summary and a bit of a plan, people who don’t have established housing find it more difficult to follow up appointments, medication, access home nursing or home help and these kinds of things,” explains Cameron. “With the availability of Tierney House, they can stay for a period of two weeks, where they can rest and recuperate in safety, finish off their health care plan, get back to those appointments, and we can ask them about the many and varied secondary physical health issues that they may have. “Given they’re with us for two weeks, we can formulate a care plan around things like housing, Centrelink, legal, financial, and all the psychosocial stuff that goes along with their physical health issues.”

Tierney House offers a step-down discharge model from an acute bed on a ward to a non-acute bed, supported by non-clinical residential support workers. Referrals to Tierney House come directly to Cameron as Manager and to a registered nurse who is also a member of the homeless health service. “Tierney House offers nine beds for men and three beds for women, and there are five beds at Stanford,” he said.

The referrals and acceptance of residents to both units remain steady. “It’s a bit tricky trying to find out who’s most at need or risk,” Cameron explains.

“For example, if we had two referrals, where one person’s tenancy was at risk, while the other person was rough sleeping, we’d obviously be inclined to go with the person who’s rough sleeping so long as their health need is also appropriate for care within a unit that does not have clinical cover.

“Wading through some of that material to determine who’s most at need at that time is probably one of the most crucial elements of the work. We’re usually able to accommodate most of the referrals that come into Stanford, whereas at Tierney House we’re declining twice as many referrals as we’re accepting. That’s tricky.”

The demand on both Stanford House and Tierney House remains high. “You wish you could support everybody who was referred to you,” says Cameron. “The fact that we’re taking over 200 a year into Tierney House, knocking back more than 400, tells you about the demand. I’d like to be able to have more beds at Stanford too, because I see the demand there as well.”

As residents move on from both supported accommodation units, their trajectories are quite different. As Cameron explains: “People from Stanford generally discharge to much more favourable outcomes. That’s probably to do with the fact that a) they’re case managed and b) they have a housing application active upon entry.” People move on from Stanford after three months with the support of a case manager and an application with either community housing or public housing, which means there’s more likelihood the individual will experience stability sooner. “Whereas people who come through Tierney House, discharged from a ward after some health issues, normally don’t have the support of a case manager, and often they have no housing application or it’s deemed inactive because nobody’s looked at it,” he says.

“The transfer of care out of Tierney House is somewhat trickier. We do see some people go straight into NSW housing properties. But we also see people go to drug and alcohol rehab, family and friends, crisis accommodation, short term accommodation like caravan parks, boarding houses, rooms above pubs and so on. Sometimes people go into custody or back into hospital, there’s many, many different outcomes.”

Cameron says they have seen some absolutely heartwarming outcomes at both Stanford and Tierney Houses. “Sometimes people see their stay here at Tierney House as a real turning point. They’re here among staff who care, they’re getting good sleep, good nutrition, their needs are getting met,” he says. “They’re accomplishing so many things in two weeks. It’s a bit of an epiphany for them. Some of the outcomes are just fantastic.”

He describes a recent example of a man who had come to Tierney House and then moved onto Stanford House. “He was struggling with HAND-related dementia, due to not taking his HIV medication regularly. He was really isolated in the world, given that Sydney is not his home city. After this experience through Tierney and Stanford, I saw fabulous outcomes for this gentleman, now that he’s been able to secure safe, sustainable accommodation. He has a good collection of professional supports, and some good social support. I think you really need a nice balance of both. Being able to provide some sort of connection to community, or to mob, is fantastic.”