Reflections from the front lines 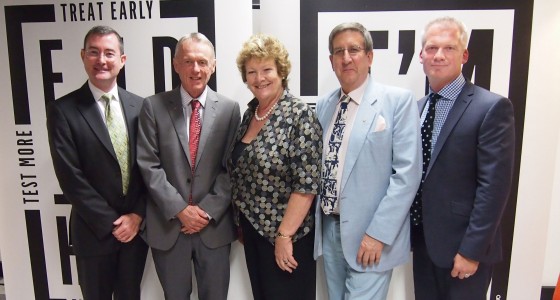 In the lead up to HIV testing week, Geoff Honnor presents part one of his personal perspective on the history of the Ending HIV response in NSW, starting with the circumstances that initiated the Ending HIV campaign.

Just over three years ago, on World AIDS Day 2012, the NSW Health Minister, Jillian Skinner launched the ‘NSW HIV Strategy 2012-15 – A New Era’. Many strategic documents envision new eras. Few exude as much passion to get it right as this one did.

The goal was unequivocal and stated boldly upfront: to work towards the virtual elimination of HIV transmission in NSW by 2020. To achieve that goal, let’s face it, the focus was pretty much epidemiologically unavoidable. Given 80% of the state’s new diagnoses annually derive from sex between men; efforts were concentrated on this primary group of gay and other men who have sex with men (MSM).

Crucially, there was a commitment to reduce the average time between HIV infection and diagnosis from 4.5 to 1.5 years, and increase the proportion of people living with HIV on antiretroviral therapy (ART) to 90%.

ACON, where I was working at the time, framed its response to the strategy’s challenges with ‘Ending HIV’. This was less a campaign and more a peer-based initiative aimed at engaging gay and MSM around this goal and having done so, mobilise them collectively to bring an end to HIV transmission.

The Ending HIV tagline ‘Test Often + Treat Early +, Stay Safe = Ending HIV by 2020’ rendered in stark black and white, proved both memorable and effective. It was picked up and adapted by the NSW Ministry of Health as branding for their HIV Strategy initiatives in the distinctive Prussian Blue markings of hospital towels and bed linen familiar to all of us from ‘liberated’ examples flapping on a thousand share-house clothes lines.

Memorable design concepts aside, it’s worth restating the obvious: the challenges weren’t just significant, they were massive. The development of the Strategy through 2012 took place against the backdrop of a fractious and less than totally convinced HIV sector.

How was the objective even halfway realistic or attainable? Wasn’t it all just pie in the sky? Why would we be encouraging HIV positive people to engage with ART early when we didn’t even know at the time, whether there was a net health benefit in them doing so? How on earth were we going to achieve the massive scale-up in testing required? And frankly, was there even a problem to solve?

By 2012, NSW had experienced nearly 15 years of stability in annual HIV notifications in an environment where HIV combination therapy meant a decoupling of death from diagnosis. This was a comparative success story against the experience in international jurisdictions with similar epidemics (i.e. driven largely by sex between men), where HIV notifications had been rising since the late 1990’s. This was in fact a landscape shift of seismic proportions, giving life and living options back to people living with HIV. It had initiated a slow subsidence of fear among the communities most at risk of acquiring HIV, and rendered our ‘traditional’ prevention approaches pretty much useless.

What was also blindingly obvious by 2012 was this: the very best we could hope for by continuing to do what we were doing, was the avoidance of an inexorable rise in HIV notifications. If we were ever going to achieve a sustained decline in notifications by doing what we’d always done, fifteen years was more than enough time to have demonstrated that. We hadn’t and clearly we wouldn’t demonstrate it. It was high time to change our approach and serendipitously so, just at the point where policy changes and emerging prevention research findings were in auspicious alignment.

The iPrEx Study had reported in late 2010 very promising findings that HIV pre-exposure prophylaxis worked. The following year saw publication of conclusive evidence of the efficacy of HIV treatment as prevention, from a randomised controlled trial specifically aimed to measure its effect.

The HPTN 052 trial which originally planned to report its findings in 2015 was stopped in 2011 when it became clear that the reduction in HIV transmission was so great, it would be unethical to continue recruitment into the less protected stream of participants. This study found the efficacy of treatment as prevention was 96%. Basically people living with HIV on ART were more than 20 times less likely to transmit HIV than untreated people.

In 2011 Australia’s HIV Testing Policy was reviewed and this redraft supported the long overdue introduction of point of care testing. This enabled the introduction of rapid HIV testing along with community outreach screening and testing. In NSW, ACON’s a[TEST] service in partnership with Sydney Sexual Health Centre, Royal Prince Alfred Sexual Health Centre, the Kirketon Road Centre and the Australian Federation of AIDS Organisations would provide the service along with clinical oversight and governance. The Kirby Institute’s Rapid HIV testing trial in men who have sex with men utilised four Sydney metropolitan publicly funded sexual health services as trial sites. They too began to introduce service models which would enable and encourage the greater client access, thus meeting the massive testing scale up requirements.

Everything was falling into place just as the new HIV Strategy neared delivery.