Peers in conversation – Part 2 of 2 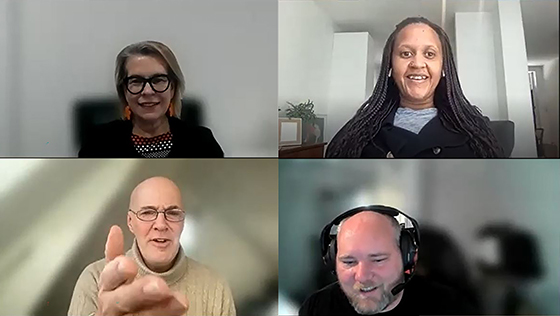 In this second of a two-part series, the co-directors of GNP+, Sbongile Nkosi and Gerard van Mourik and Positive Life NSW’s CEO, Jane Costello and Deputy CEO, Neil Fraser discussed our shared experiences of HIV as a rights-based movement, and reflection on World AIDS Day as a global event, and how we can continue maintaining the relevance of World AIDS Day to today’s community.

GNP+ is a global network of interconnected individuals and organisations. Under the leadership of co-directors Sbongile Nkosi, based in Cape Town, and Gerard van Mourik, based in Amsterdam, GNP+ supports national and regional networks of people living with HIV to improve access to quality HIV prevention, treatment, care and support services.

Positive Life NSW’s CEO, Jane Costello and Deputy CEO, Neil Fraser, based in Sydney lead the largest peer-led and peer-run representative organisation of the body of people living with HIV in Australia, to eliminate prejudice, isolation, stigma and discrimination and to advocate for the optimum well-being, care and support for people living with HIV/AIDS, our partners, family members and significant others.

A HIV diagnosis is one where we quickly discover we are affected by a range of assumptions, judgement and for some of us, even legislative control. Unlike other manageable, chronic health conditions such as diabetes, asthma or arthritis, a diagnosis of HIV comes uniquely coloured with stigma and discrimination. In the face of this new reality, many of us living with HIV quickly find ourselves with a new identity which knits us into a rights-based movement.

Co-director of GNP+, Sbongile Nkosi, shared her personal experience to describe this intersection of health and stigma: “I’m going to give a South African perspective. When I was a young girl in the 80s and 90s, I saw so many of my family members and neighbours, dying of this disease. Everybody was scared in the community, it affected all parts of society. That’s how you’re born into the movement. I grew up in the movement because of my parents. I leave and I try to work in health journalism. Then I get HIV and somehow I know where home is.

“HIV displaces you in the world and therefore you have to find people like you that can give you a community. To find home and to find refuge, you have to join a movement, because that’s what everybody has had to do, because of this displacement in so many ways.”

Positive Life’s Neil Fraser responded, “Yes, and I think that experience is a global one. Wherever you are in the world, a diagnosis is still a lot to process, and that commitment to community crosses nations and boundaries and languages and cultures. That sense of community is there and available to everyone, but stigma still plays a big role in preventing people from being able to engage with that community. We’re not a homogenous group; just having HIV doesn’t make us all friends. But there is something special there.”

“I put myself in that second generation of people living with HIV. I had an uncle who passed away from AIDS, and it was just something that wasn’t spoken about in the family. Today living with HIV, I see people who have that generation of elders, with that lived experience and unconditionally provide that sense of community and support, particularly early on.”

“In regard to the comparison with diabetes or any other disease,” GNP+ codirector Gerard van Mourik said, “HIV comes with the stigma and discrimination and shame, and HIV is also about sex and sexuality and identity.  My husband is Nigerian, and we have daily conversations about evolving MSM and trans communities in Lagos and in Abuja, and even in the north where the Boko Haram is fighting. The inability to speak about your identity and who you are makes HIV distinctively different from diabetes. I find it an emotional thing to talk about, it’s so different from diabetes, and even cancer, sorry to say.”

Positive Life’s Jane Costello agreed. “If somebody told you that they had cancer, they would invariably hug you. If somebody says, I’ve acquired HIV, it doesn’t evoke the same response. HIV is completely different. It’s not like cancer, it’s not like diabetes.

“I think we’ve been forced to come together as a movement, because that’s what we have. It’s a movement that finds us because of the stigma, and to a degree, the shame. As Gerard said, it’s about sex. It’s about all of the social mores that we don’t like to talk about in society and the conversations that we don’t like to have. You can call it a movement, you can call it whatever it is, but we come together, it is a moment of solidarity because as peers, we can have those conversations because you are walking a journey in somebody else’s shoes.”

Neil responded with an analogy: “When the Titanic is going down, and two people survive, they have the shared experience of something that was life-changing. When they get back to land, they separate, and probably never see each other again. Whereas with HIV, because of that experience of stigma, we do collectively continue to come back together from time to time. There is something there. The stigma draws us back together in that communal movement.” Conversation turned to World AIDS Day as an annual global day of recognition of the shared experience for all people living with and affected by HIV. Reflections turned to the value and relevance of World AIDS Day for today’s communities.

“I remember the 80s and the 90s and what we went through,” said Jane, “Today I look at young people now who’ve got no reference point for this time of recent history. World AIDS Day is an abstract for so many people.

“There seems to be a genuine lack of understanding about what it was like and why we became activists, why this was something that we absolutely had to do, and what people went through.”

“Yes, for me, this is a critical internal dialogue,” Sbongile said. “How do we make sure that this day commemorates what we see on the ground? I don’t see celebration! “Let’s look at someone living with HIV in India, who lives in the slums and wakes up on World AIDS Day and has to think about their livelihood, about eating and fetching treatment which probably does not exist,  and probably has not had a viral load test.

“Or if you’re a young sex worker in South Africa, you wake up on World AIDS Day or every day, to stand on the street corner to do your work, but also to run away from the police and to deal with the stigma every day. There’s a context to it and I don’t think we have these conversations when we talk about World AIDS Day. I don’t think any of us think about people living with HIV, and the daily struggles, even on that day. There’s a disjoint that we are seeing within our response.

“I work for the GNP+ and I’m HIV positive, but I’ve now moved into a more privileged position in society. Therefore World AIDS Day means so much more to me. If we’re talking about inequality, how do we allow World AIDS Day to no longer be led by the global north* institutions?”

“I think we could elaborate more about the global north,” Gerard said. “It dictates the debate around HIV and notably on World AIDS Day, intentionally or not, but it still happens.”

Neil responded: “I take your point, Sbongile, about the global north setting the agenda, even with last year’s global theme around ‘global solidarity, shared responsibility’ as set by UNAIDS. Australia doesn’t even participate in that. We continue to have a very isolated engagement, and I think that’s something where we could work with GNP+ to learn from those experiences.

“In Australia, by and large what happens on World AIDS Day is that policymakers launch new HIV strategies, pharmaceutical companies publish research around the latest and greatest drugs to try and get subsidised in Australia; here it’s about building political capital.  I think Australia could be more reflective on the global experiences. It is not a day for self-promotion, it is a day to remember.”

“The global north, and ourselves in Australia, are in a very privileged position, where we have access to medication, where we have good health care systems. It’s how do we ensure that everybody’s experience of HIV is enhanced in some way and that we’re not leaving people behind?

“We’ve ignored populations or they’re labelled too difficult to deal with or we really don’t know what to do with them, or we haven’t got an answer for it. I think we need to do better in terms of finding those answers and creating those solutions and acknowledging that our own privilege does not absolve us from that.”

Sbongile agreed: “It speaks to seeing HIV-positive people as human beings. There’s been such a biomedical approach to our lives but even with the inequalities, it’s showing that there’s more to us than HIV. Yes, HIV is a big part. And there are other parts that are key to ensuring that I stay on treatment, and I stay healthy, and we haven’t had those conversations.”

“Globally, in the past thirty to forty years, we’ve had roughly 43 million lives lost to AIDS,” said Neil, “With 4.5 million lives lost to COVID-19, our health ministers proclaim this as a once in 100 years event. We have a very short memory of what has happened, and what is continuing to happen. We really haven’t learned well from the past.”

Jane agreed, “There needs to be a recognition around World AIDS Day of what has gone in the past, so that we can use that to inform our future,” Jane said. “How do we move forward and change people’s lives, not just the privileged few?

“For me, it’s ending HIV transmission. We’ve still got people living with HIV who have very poor outcomes. What are we then doing about the populations of people living with HIV, and the extreme ends of the spectrum that we live on within that continuum, and that, for me, is really critical to our conversations around World AIDS Day.

“It’s been an absolute pleasure, an honour and a privilege to speak with you both, and for sharing so much of your valuable time. Thank you very much. It’s been really affirming. I think the opportunities for collaboration would be wonderful to explore.”

*The Global North refers to those countries which are technically and socially well-developed. These are normally located in North America and Europe.