Our changing conversations – the PSB two decades on 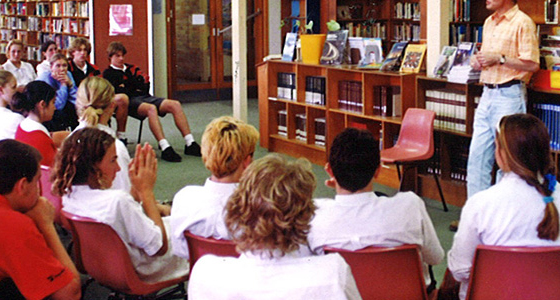 As a Positive Speakers Bureau (PSB) presenter of twenty one years for Positive Life NSW, I have been privileged to hear stories and see lives transform from bleak to hopeful, through a time of fear, illness death and anger. I have been a witness to this transition out of ominous black storm clouds to clouds of grey with patches of blue, rays of sunshine breaking through.

It was 1996. A tide of people had flowed down Oxford St and College St to The Domain in Sydney. It was my first Candle Light Rally and my first talk as a Positive Speaker. I stepped out of this ocean of humanity onto the stage. I faced thirteen thousand people. Thirteen thousand candles lit in honour and remembrance of those who’d died of AIDS.

As a 33-year-old man living with HIV, I was overcome with awe, fighting back tears. The unifying glow of love and support radiating from this large and diverse sea of people was both heart rending and exhilarating, sad and beautiful. It was a time of urgency and crisis; more people were dying of AIDS than ever before. My partner had died at the end of 1994 and I was on prophylaxis for multiple AIDS defining illnesses.

After the eternity that was my five minute talk of thanks and remembrance I stepped off the stage alone and into the dark. I was overwhelmed by the scale of the event. Blinded by tears I sobbed my heartbreak onto the ground.

Slowly at first, members of the nearby crowd stood and left anonymity behind to personally embrace and console and thank me. Young and old, mums, dads, siblings, partners friends, carers, positive and negative, one after another. In my thanks to the angels in the crowd I had not anticipated the impact or amazing response to my story, a common story of that time. I felt so honoured and privileged.

In those days our talks were simply presented. Our stories, our lives, our humanity, shared with the broader community in the hope of bringing about compassion for and acceptance of those living with HIV/AIDS. Meanwhile along with us, our supporters, advocates and doctors endeavoured to improve conditions for people living with HIV/AIDS (PLWHIV/AIDS).

From the very beginning of the HIV/AIDS pandemic in Australia conditions were not good for those with HIV. Little was known about HIV. Misinformation and misunderstanding were rife. This led to fear, stigma and discrimination, even within those communities most heavily impacted by this disease.

The ‘Grim Reaper’ advertisements brought broad community attention to the need to practice protected sex yet it was so frightening it only served to increase the fear, stigma and discrimination exhibited towards those with HIV. It did nothing to educate or dispel the myths about HIV. Basically it said ‘AIDS kills’ and thus the inference was that we were killers and blame raised its ugly head. I remember often hearing the joke “what does GAY stand for…got AIDS yet?”

Tales of rejection by family and friends were commonplace. Being turned away from medical and dental care really happened. Eviction from rental accommodation, loss of jobs was also occurring. Bashings and even murders were in the media. Often very negative assumptions were made about your character or sexual behaviour. It was your own fault and you were to blame, if you got HIV.

Meanwhile we were dying horrible deaths, fighting for something to be done, for treatments or a cure to be found. Our time was precious and limited. Sadly some gave up and ended their lives before disease could. A sense of urgency impacted all that we did.

Activism and advocacy, angry desperation, hope and despair were the tone of the 1980s. To say that we were living with a heavy black cloud over us barely expresses the feeling of having this disease. In 1984 I remember being told a cure would be found in five years. Five years later I was told the same thing. Ten years later I was told the same again. I was scared and angry. We didn’t even have adequate treatments! A generation of people were dying. Those were years of desperation and waiting.

As the Positive Speakers Bureau grew and matured, we speakers came to realise that our stories had the power to make real change. Societal changes beyond that of acceptance and compassion. Our stories could inform and educate, turn apathy and disinterest into action. We could impact the social, medical and political. Most of all we could impact and improve our own lives and the lives of those to come.

Our stories started to weave in information addressing misconceptions, modes of transmission, HIV progression, AIDS, stigma, discrimination, loss, grief, joy, resilience, support, friendship, sex and relationships, HIV services, work, health care and advocacy. Health care was a protracted and desperate campaign. We were demanding and hopeful for a cure. We also needed treatments for the rare health conditions that we were getting as our immune systems failed. This was a slow process for those with HIV. As a cure seemed less and less likely we were fighting for the development of HIV treatments. In the meantime people died.

In the face of death, resilience often presented itself as humour. Between 1990 and 1997, I was a breath from death on five occasions. I’m still here but many aren’t, and I was fortunate to be witness to their final days. In those years I spent a great deal of time in the HIV/AIDS ward at St Vincent’s Hospital and watched as many dealt with illness and mortality. One of my dearest friends, Gordon, had a T-Cell count of two. He had named them Yin and Yang. I remember the day he told me with a laugh and a smile that “Yin and Yang had gone on holiday.”

Always and foremost was our personal and honest stories of the impact of HIV on our lives; the human face if you will.

Today our PSB presentations are more positive with the advent of good treatments. They are also more sophisticated, targeting the differing needs of our clients, be they other NGOs, universities, schools, health care workers and more. Our talks are always focused on our lived experiences and as rounded, diverse and unique as each of us is so too are our stories.

Our equally powerful secondary messaging arises from the fact that HIV does not happen in isolation and our experiences of it can be affected by our gender, sexuality, age, culture, ethnicity, co-morbidities, employment or not, mental health, social and regional isolation, homelessness, socio economics, religion, family, friendships, relationships, interests and self-esteem to name a few.

By addressing these in conjunction with HIV, we portray the reality and diversity of PLHIV, broadening our target audiences and perceptions as to who has HIV. We can fit the speaker to the audience and client needs. We use our voices, our faces, our experience to address stigma, discrimination, our concerns, our needs and in doing so empower ourselves and elicit change.

Through all of this, there has always been a sense of hope and humour, joy and gratitude for that which remains. The positive and dramatic changes in treatments and prevention strategies are normalising our lives. The picture is less dire. Sunshine is replacing the storm clouds of the past. HIV is a chronic condition like diabetes, they say. Diabetes though does not come with moral judgement, fear, stigma and discrimination. Let us not forget the small number of those for whom life with HIV is still a struggle, who will not live the one pill a day dream and for whom medication is failing or for whom the damage is done.

Attitudes have changed for the better and prospects have vastly improved. There is still no cure and we still have much to do, not just in regard to stigma and discrimination, but policy, law and equality as well. The overriding theme of our stories always has and will always be resilience, hope and empowerment.

The conversation must continue.