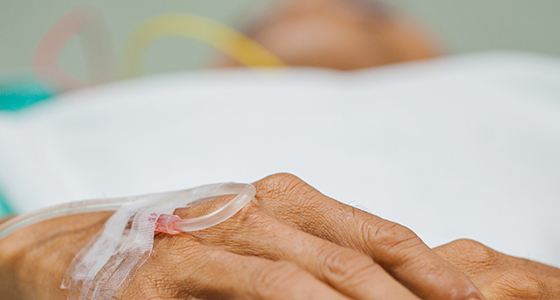 I remember on Monday 22 August 2016, I woke up around 8am as usual and went on with my morning activities around my unit but I was feeling a little under the weather. ‘I’ll be fine’ I thought to myself. Shortly after 9am, I suddenly felt much sicker and less than 20 minutes later, I felt a strong rip on my left side of the chest.

I slumped down on the couch from where I was standing and both my feet were unbelievable heavy. I knew that I had to call an ambulance. When they arrived, the ambulance officers asked me questions about the possibilities of alcohol or drug use or overdose. Although I told them several times that I do not use drugs nor drink alcohol, they didn’t believe me.

Given I was so violently ill, the ambulance took me to my nearest hospital emergency department where I was handed over to the drug and alcohol team. They also did not believe anything I told them. I was admitted to hospital for 12 days.

For the first week there, I had unbearable gut pain and I was refused any pain killers. I plead with them to call HIV specialists to help find out what was wrong with me, but they wouldn’t do so. I was quickly losing trust with the medical team that was looking after me. After seven days of being there when I was finally cleared of any substance use, they offered me pain killers even though by now my gut pain was significantly less.

This experience in August wasn’t over yet. The mistreatment I experienced at that time led me to be in hospital again by December. I didn’t want to go to hospital, however a friend who was with me called the ambulance and they took me back to the same hospital. I was there overnight and they discharged me home the next day. I was still vomiting and feeling seriously sick.

Within two days I was getting worse but refused to go any hospital. By this time I was thinking, ‘Never again, I’d rather die’. I decided to trade-off avoiding medical attention when I desperately needed it ‘and that, I rather DIE in my public housing flat’, to avoid the feelings of stigma from the people who I needed to help me get well.

I had two friends with me, who tried to persuade me to seek treatment. They eventually took me to an emergency department at a different hospital. Soon after arriving there, I started to hallucinate and going in and out of consciousness. At this hospital, the staff were very different. These professionals were kind, empathetic and understanding. They knew what to do and I felt they looked after me as human being. Shortly after being admitted to the ward, I had a major seizure. It caused my brain stem to swell and my organs started to shut down. Just as I was about to be induced into a coma and given a tracheotomy, I opened my eyes and gain consciousness. A nurse told me that I was GONE.

I am very familiar with stigma and discrimination as someone who did not grow up in this country and as a black woman. Since I found out that I was HIV positive nearly 20 years ago, this awful attitude from society and now from health care providers frustrated me and it is still very difficult to deal with. Social assumptions we have around drug and alcohol use, around sex work, and being black along with judgements around HIV, increases stigma and discrimination, destruction and apathy. When a person living with HIV is treated badly in healthcare settings through stigma and discrimination, their health will suffer.

That is exactly what happened to me in August 2016, when my life was put in danger in a healthcare setting because of the assumption by healthcare workers that I was abusing drugs or alcoholic and not telling the truth. Even the strongest person living with HIV can feel scrutinised. I only wish they knew at that time, I am a TAFE graduate, I work regularly as an interpreter in almost all Australian refugee camps, a mother of six and grandmother to over 13 kids.

Discrimination destroys a person’s self-esteem and the effects can be worse than the virus itself. Stigma is inhumane, denigrating, and humiliating. Even as a very strong woman with all my experiences of life, I felt so disheartened by these feelings of stigma and discrimination that I was ready to avoid the healthcare environment completely.