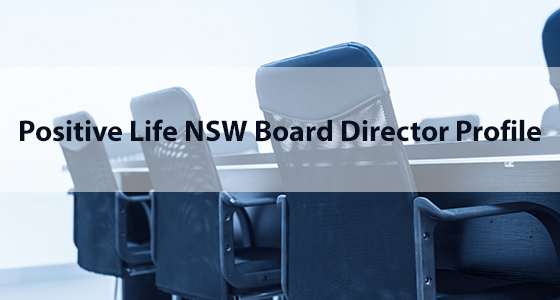 My partner and I had a very late, life threatening diagnosis in 2008. Now I am a 60 year old Transwoman living with HIV. Unbreakable and undetectable, still going strong.

2022 will be my fourth year as a Positive Life Board Director. Apart from being a speaker with the NSW Positive Speakers Bureau for Positive Life, this was a further way I thought I could ‘give back’ as many of the skills I had acquired from my previous career were transferable.

Every person on the Board I have worked alongside brings a unique collection of skills embedded in a specific social and cultural perspective as an HIV+ individual. Only someone living in the community understands the issues and complexities of what it means to live with HIV. Initially, I thought it was only my organisational and critical thinking skills that were of advantage. As I’ve learned from working with others, there is also a wealth of unrealised skills and traits that once identified, is of great service in many roles across the work of Positive Life.

My HIV diagnosis in 2008 changed my life forever, to the extreme both internally and externally. In the early days of diagnosis it was a day-to-day fight for survival while at the same time stripping me of everything I ever held of value. In 2022 my thought process is; the person I am today is a result of everything that has come before. I like the person I am today and the future is not a place to be feared. As strange as it sounds, an HIV diagnosis was a wake-up call for me, it gave me a reason to want to live again.

HIV is not going away anytime soon. My major concern is hearing things like: “really I didn’t think that was around anymore” or that condom use is ‘not necessary’ by some men. It horrifies me that such thinking remains after decades of HIV education. While the dedication to the prevention and education of HIV by elder members of the HIV community is strong, it is the younger generations who will have to pick up the torch on this and go forward in a society far more diverse and complex than it was for me, and this remains a concern of mine.

By Positive Life NSWPublished On: 4 April 2022Categories: Blog+, Opinion, TalkaboutTags: #201 – February 2022, Board Director Profile, In My Own Words0 Comments