My bumpy ride towards residency 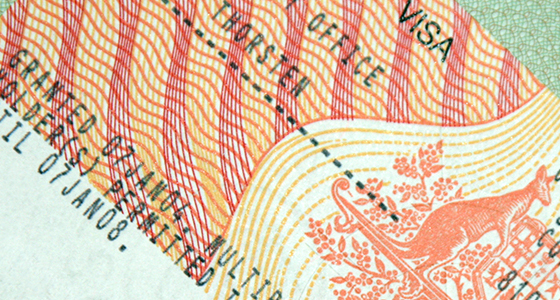 I am Henry*, a 38-year-old gay Malaysian man who is still in the process of moving permanently to Australia.  As a man living with HIV, I’ve experienced a few extra hurdles throughout this venture which I want to share with you as well as some suggestions to make the process a little easier for those who might be planning a similar journey.

When I was diagnosed in 2005, I found out that I was a slow progressor and I wasn’t in need of antiretroviral (ART) medication until September 2012. Over this time, I was actively involved in HIV volunteering work in Malaysia and with a PLHIV advocacy organisation in Bangkok.

My immigration travel story starts in 2016 when I got together with David, who is now my husband. We had known each other through mutual friends for some time before this in Malaysia, and met near the end of 2014.

David, who is HIV negative, first came to Australia in 2012 as part of a skilled migration program. After a couple of years here, he had some difficulty finding the employment he wanted, so he returned to Malaysia in 2014. So our new chapter began.

2016 was a very full year for both of us. Not only were we working on our relationship, but David scored fresh contract work to work remotely for a firm in Melbourne. Once this turned into a permanent position,he moved to Melbourne in May 2016.  I remained in Malaysia for another year, and joined him in June 2017.

Almost immediately we focused on registering our partnership as a de facto relationship in July 2017. The Marriage Equality Act was yet to come into force later that year in December.  David was already an Australian Permanent Resident, so this helped support my migration case and I proceeded to apply for my resident visa.

In 2018 I received the refusal letter to my application and the reason for this was due to serostatus or HIV and the risk that I might incur ‘significant cost’ to the Australian government. They did not deny our relationship status or any other aspect of our application. The decision was based purely on how much it could cost the government  for me to remain permanently in the country.

We did not put the application in blindly. I actually expected some resistance to the application, based on knowing the experiences of others like myself also living with HIV who were pushed back. The rejection letter itself was pretty cold and harsh to read. Regardless of my mental and emotional preparation for this decision, I still felt terrible when it happened.

Nevertheless, the moment I received the rejection, we enlisted the help of a migration lawyer and filed an appeal with the Administrative Appeals Tribunal (AAT).  In the midst of this time, now that the Marriage Equality Act had passed, we got married in April 2018. At this point in time, we’re just trying to live our lives as best we can.

One of the main reasons why it’s important to live in Australia is the fact we can have our relationship legally recognised. This makes all the difference to us. Of course, there is nothing stopping us from being together in Malaysia. It’s the little things like having my partner as next of kin in the case of a medical emergency, being in a position to pool our finances within a legal structure along with joint ownership of property where we’re recognised as a couple. There would be no such thing in Malaysia.

At the time of writing, my appeal is still pending, and we are still waiting to hear the outcome.  We focus on trying to not let this current appeals process affect us too much.

However, it affects us in terms of planning for the long term, like purchasing property. Personally, the main cost is the emotional investment of dealing with this situation. The financial cost is beside the point. We both have jobs and are able to participate economically without any problems. We got into this knowing the 820/801 visa (temporary partner visa as the first stage towards a permanent partner visa) would not be cheap. It’s not even the additional financial cost of retaining an immigration lawyer. It’s the cloud of uncertainty until the appeal is heard. Always the uncertainty of how we are going to proceed.

There’s always the chance the AAT could come back and refuse me again. This would be devastating if this occurred. This is a feeling you can’t shake until it’s over.

Now that the appeal is underway, and until the hearing is actually scheduled, there isn’t anything for us to do. We can only keep up with the changes in policy ourselves. We have kept in touch with our immigration lawyer, but still we don’t have a date for the actual hearing.

For the time being, I hold a bridging visa and I can continue to work here in Australia. I’ve been stable and virally suppressed for a long time, and am fully capable of being employed, participating in society economically and being a contributing member of society here.

There’s no doubt with today’s medication that my health is not going to incur any long-term detrimental cost to the government. While I’ve been in Australia, my sexual health has been monitored through Melbourne Sexual Health clinic. Yet my HIV care and medication are based in Malaysia. My interim Medicare coverage covers only my doctor’s consultations, not medication. So, even my HIV medication is not dispensed from Australia.  The method for calculating the cost in the rejection letter, didn’t take into account the medical reality of my life and it seemed a little outdated. Feels like they’ve plucked a random figure from an outdated template.

I go back to Malaysia once a year and I’ve worked out a system myself, so my doctors in Malaysia can review my blood results and prescribe the following year’s medicine.  I get a printout of all my bloodwork through the past year from my Australia clinicians prepared to give to my Malaysian HIV doctors to review. Based on this information, they reissue a one-year prescription and in this regard, my friends are my support system. They collect my medicine on my behalf and I am still accessing my HIV medication in this way, to this day. I’ve been on the same regimen since 2012 and I’m perfectly happy with what I’m taking. At this time, I’m not about to make drastic changes to my treatment regimen. If there is something really new, with way less long-term side effects, I might consider in the future.

If I run low on medication before a trip home, there are online pharmacies who can ship the medicine to me, and I’ve restocked once or twice through this method. Only recently have I moved my care to the Alfred Hospital and even that is based on advice from my immigration lawyer.

In the meantime, I juggle a fair bit of paperwork to manage life. For example, while I have interim Medicare coverage, I must renew my medical coverage each year and get a new letter each year that states my case is still pending. My current visa allows me to leave Australia, but I have to apply for a separate bridging visa to come back into the country every time we travel for holiday, work or visiting our families.

It is a time of limbo for me. As much as I try not to think of my residency status, it will always crop up on day to day stuff. I need to set reminders each time I see my doctor, to make sure my medical coverage is still valid. When my workplace sends me overseas for work, I have to remind them I need extra advance notice, so I have time to get a new bridging visa to come back into Australia.  Sure, it’s part of the process, but I feel like I remain in limbo.

If I didn’t have HIV, then immigrating to Australia would have been simpler. I have other friends who have gone through the exact same process that I have gone through, and for most of them it has been quite smooth sailing, even if it took some time. In my case, all I could see over and over again, is they’re going with dollars and cents, whether it’s valid and applicable to the reality of life for people like me living with HIV in 2020.

The first thing I would suggest to anyone living with HIV and planning to immigrate is to brace yourself. It’s a bumpy ride.  I think the main thing I would have done differently is to use an immigration lawyer from the get-go. We did our first application ourselves. I can’t help wondering if things might be a little different if we’d done things from the start, with the help of immigration experts.

I would recommend anyone in similar shoes to think seriously about using an experienced immigration lawyer. There are experts in this area who can help out and we received referrals to the HIV/AIDS Legal Centre (HALC) in NSW and the Gay and Lesbian Immigration Task Force (GLITF) in Victoria.

Lastly, I wish the Immigration Department had kept up with the times on this medical issue. I understand this is an important thing to consider managing costs and ensuring there are no threats to public health under the Migration Act in Australia, but we are no longer in the 1980s or 90s.

While at times it has been a disheartening process, my doctors have been extremely encouraging. They tell me, they know of others like myself who have managed to come through this and I believe this is not the end of the line for me.

Strangely enough, we’ve been told the longer they take to set the hearing date, the longer it allows us to solidify our case and really set down our roots as we grow our life in this country. So, this may be the bright light at the end of the tunnel.

This whole process of making a life together has been definitely stressful for both of us, but it has also drawn both of us closer together and stronger. We have to pull together to make this work and find our way through it. Having said that I wouldn’t wish it upon anyone. It really isn’t the kind of test anyone has to go through to prove anything.