Muslim and living with HIV 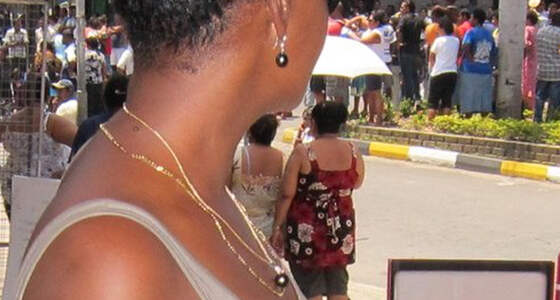 About twenty years ago, I never would have thought I’d be alive today. I was thirty two and a mother when I was told I was HIV positive at the refugee detention centre.

I associated HIV with death, and death alone. Nothing else came to my mind. I refused to accept the diagnosis, believing that I didn’t fit the HIV stereotype. “I was only married twice, and they were both healthy,” I sobbed to the doctor. I underwent a second medical check-up and the result was the same.

The questions asked by the medical professional were too confronting for me and I couldn’t hear or answer what was said. Although I was a very late diagnosis and had AIDS dementia, I only had a detectable viral load count of 8,000. “That’s why you are still alive,” the doctor said to me. Based on the few questions I was able to answer, it became clear that I was most likely infected with HIV when I was young.

I was told that I’d be dead within two to five years if I didn’t start medication as soon as possible, as I had a very low CD4 count. At this point all I could think was “what about my children”, “how will I deal with this?” and “how will I tell my family?” Fear of rejection, being discriminated against and shame overcame me. Unfortunately, these fears came true. I was humiliated, abused, bashed and called all sorts of horrible names.

Somalia, my country of origin, is the only nation with a 100 percent Muslim population. It is also a predominantly patriarchal nation. I had an arranged marriage when I was twelve years old and my first child when I was thirteen. At the age of six, I underwent Female Genital Mutilation (FGM) with four other girls from the neighbourhood. The same blade was used over and over, without any anaesthetic. Looking back, I can see the risks and my vulnerability.

People still found it easy to point their finger at me when I rejected the man chosen for me. They said I must be a whore to run away from him. The reality is as a woman in the Islamic world, it is a sinful thing to disobey a husband who has been chosen for her.

I could hardly handle the stress of being in the detention centre as a refugee and being diagnosed with HIV, so I isolated myself. After I was released from the centre, I was in and out of hospital and at the same time I needed to raise my two children, who were both under ten years of age. During this period, I never thought I’d live to this day. My arranged husband passed away about 13 years ago from an AIDS-related illness, yet all of my children, conceived during this marriage, are healthy.

After many years of humiliation and soul searching, I’d finally had enough of being mistreated. To move on, I knew I had to accept the situation I was in and stop feeling guilty. So I joined Positive Life NSW and they trained me to become a public speaker. This experience has been liberating.

Being HIV positive has changed my life in so many ways. I have vowed that no girl should have to experience what I went through and I am doing my best to improve the lives of women in my community. Child bride marriages and FGM are no longer practiced amongst my family and friends. I speak at schools and in the community and I inspire many. I have gained so much knowledge, met so many different people and made so many friends.