Life with my new housemate: COVID-19 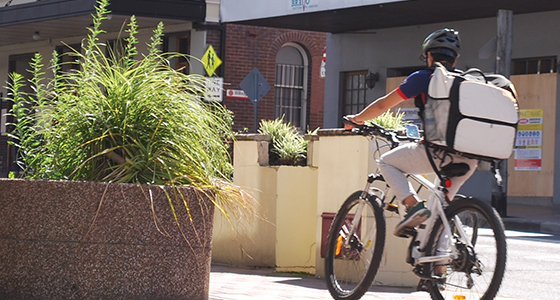 We are the survivors of the HIV/AIDS epidemic that started in Australia in the early 1980s, and there are some similarities between it and the current COVID-19 pandemic. Both were utterly unexpected, both have had wide impacts on society, and both have seen a frantic search for a vaccine or treatments. But this current one has some very different features; self-isolating and social distancing being the two main ones that have impacted on my life [although no mention has yet been made of any need for condoms on bananas].

Because of my age, my boyfriend [my jailer?] tells me I mustn’t go out. I am in the high-risk group, so I am now housebound, an involuntary ‘houseboy’. My rewards are that he does all the shopping, and that we can, however, go for a half hour walk later at night, after dinner, when there is virtually no one around; we wear our facemasks, just in case.

For someone like me, living in Darlinghurst and used to plenty of activity all the time around on the streets, it is now an uncanny sight on these walks through the darkened city, of so few cars and all those empty buses going by. A few similarly-masked people walking along on the deserted footpaths, and the only other movement being the food delivery riders, like hunched ghosts peddling by in the night, their packs of much anticipated tasty morsels suspended on their backs.

Since my gym has closed, I don’t get to do all those boring things, like stretches and resistance training while giant ‘Muscle Marys’ grunt and sweat nearby, but I do miss the eye candy. So I need to do some sort of exercising at home, but Jane Fonda’s video of the necessities doesn’t make me feel – or look – any younger. Memo to me: I must change exercise videos.

So I am getting fatter. This is partly because of less exercise, but also partly because I have taken to trying out new recipes to fill in all that unexpectedly available spare time. All it has given me is a spare tyre.

My local DVD shop is still open, but with new arrangements. It has shorter opening hours, and ‘opening’ now relates to the slot in the door where we used to slip the finished ones back in. Now we pass them in through there to Ben or Ian, with a list of the ones we want, and they will mark the old ones off and pass out the ones we have requested back through that slot. We press our eftpos card to the glass, and then we are on our way, a new way of living.

As a way to overcome the isolation, a group of us have started exchanging jokes and videos about the epidemic. Most of them are very funny, although some of them are clearly ‘Not for Public Distribution’. I now know how to turn those old jockstraps into facemasks, and have seen the Queen of England singing “We’ll Meet Again’, a la Vera Lynn. Julie Andrews has seen a resurgence of her career, with numerous takes of The Sound of Music [no social distancing with those kids on the hill, so the police are seen rushing in]. I hope she gets royalties for these new ‘performances’. Donald Trump continues to provide the most amazing advice, much of it to the very public chagrin and horror of poor Dr Anthony Fauci, who did so much good work for us in the early years of the HIV/AIDs epidemic all those decades ago.

Some of us have also developed a ’book swap’ group. We post lists of what we have just finished and what is available, and those of us who are still allowed out [the ‘youngsters’, those in the fifties], do the deliveries.

Technology helps. With two smart phones, an iPad and a laptop in the apartment, my partner and I are managing reasonably well, without getting in each other’s way, able to continue the necessary separate parts of our lives. The Net and smart phones do take some of the problems of self-isolation away; my friends are just a What’s App away for a chat, and those videos and jokes keep coming.

But I now have time to ponder what all these changes mean for my life. I have become aware of the things I unthinkingly used to take for granted – connectivity, with friends and with the wider world, and how important that was. I think that after all this is over, I will be a bit more mindful of my friends and how their lives are going.

But also, will the wider world be the same again? At the end of the pandemic, we will have lived through many months of people now working from home. Will a new model of how work is to be conducted have emerged. Have we been thrust unknowingly into an ‘online world’, a new frontier for many, that becomes the ‘new normal’ of the 21st century, one that the younger generations are far more adept at, and at home with? Will the Millennials become the new arbiters of what the world should be?

Around the globe, western governments are being forced to provide funding for fundamental services they have been walking away from for decades, in pursuit of their neo-liberal ideology. Will the various populations tolerate any attempt to revert to those previous less compassionate policies when all this is over?

And will ‘fake news’ finally be put to rest – its purveyors sent packing? We can only hope so, and it is always nice to have some hope in a brighter future.