Honoured to make a difference 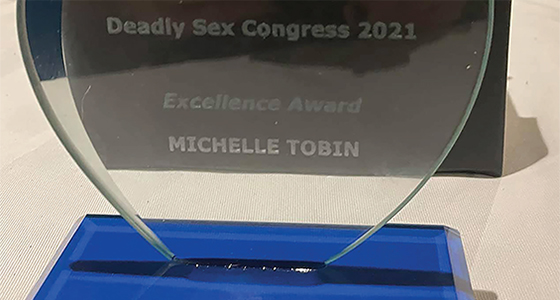 Michelle Tobin, Aboriginal Health Program Officer at Positive Life NSW, has been honoured for her work in the Aboriginal and Torres Strait Islander community. Michelle received an Individual Excellence Award, the first in her health work career, for her volunteer community work over more than 20 years.

“Receiving the award meant the world to me,” Michelle said. “It’s an acknowledgement of my work with PATSIN (Positive Aboriginal and Torres Strait Islander Network), and it’s in recognition of our brothers and sisters who’ve gone before us and may not have received recognition for their work as leaders for our mob.”

Michelle particularly singles out colleagues such as Neville Fazulla, Arone Meeks, Rodney Junga Williams and Ian Saunders. “There are many that have gone before us who have never been acknowledged for their advocacy and leadership for our communities,” Michelle said. “Not only is it important to be paid for having a place at the table and sharing our experiences; we also need to be acknowledged for the sacrifices we make to make life better for our communities.”

She received the award at the two-day Deadly Sex Congress in Cairns in June, auspiced by the Australasian Society for HIV, Viral Hepatitis and Sexual Health Medicine (ASHM). The Congress addressed a range of sexual and reproductive health issues for Aboriginal and/or Torres Strait Islander people and included blood-borne viruses (BBV) and sexually transmitted infection (STI) updates from the Cairns Sexual Health Service.

As well as her employment with Positive Life NSW, Michelle has a number of community-based volunteer roles. As a PATSIN Board member, in 2019 she worked with Cairns Sexual Health with newly diagnosed Aboriginal and Torres Strait Islander people at a health and wellbeing retreat. From there she was invited to the 2020 Deadly Sex Congress, which was delayed for a year due to the COVID-19 pandemic.

Michelle is also aware of the need to encourage the next generation to participate. “I’m taking a step back and having new voices step in but having me there to support them. The more voices we have speaking out on behalf of our community, the more people will listen.

For Michelle, it’s also about the mentoring. At the four-day health and wellbeing retreat in Cairns in 2019, organisers held sessions covering lived experiences, as well as available services, treatments, and resources.

“One of the significant things that came from the retreat was with those 12 people who attended,” Michelle said. “Within the first hour we had all clicked as if we were long lost family members, and it was so valuable to be able to sit around a fire and for everyone to talk about what’s brought them there and some of the issues that some people had faced.

“Mental health plays a significant part for our communities, especially when they’re shunned from their families and their communities and then they had to move to another place; and then there are other issues, new sexual partners, disclosure, stigma, discrimination.

“There was a younger guy there who’d been living with HIV for eight years and lived in Cairns and had never met another positive Aboriginal person in the whole time of his diagnosis, and for him to feel that connected and part of something was truly amazing.

“The retreat not only brought us closer but highlighted the fact of isolation and the importance of staying in touch with one another.”

Michelle would like to hear from Aboriginal and Torres Strait Islander people living with or affected by HIV to have a yarn about what it takes to make a positive difference! Reach her on (02) 8357 8386 or 1800 245 677 (freecall) by email on contact@positivelife.org.au