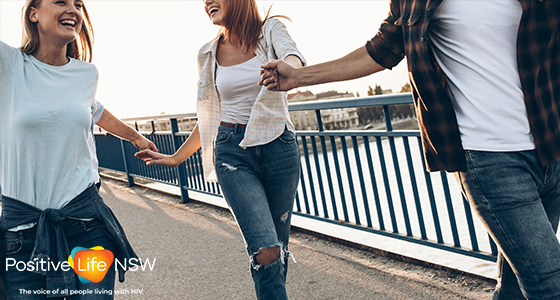 Having HIV does not stop you from having happy and healthy sexual relationships.

As a woman living with HIV, a healthy sexual relationship is one where the real risk of potentially transmitting HIV is put into perspective, and it is one where I make informed decisions about my own body and sexual health that are best suited to me and my relationships.

There were times where I viewed myself as ‘infectious’ and ‘unloveable’ because of my HIV status. In fact, the fear that I had about potentially transmitting HIV to my sexual partners was so overwhelming, that I’ve avoided some sexual relationships altogether.

There is currently a campaign called U=U (Undetectable = Untransmittable) to promote this message. To be honest, it took me time to feel comfortable with this message! I don’t need to use a condom to prevent my sexual partner from contracting HIV.  This is known as TasP (Treatment as Prevention) which is the message that HIV treatment prevents me from passing HIV on!

People living with HIV who have an undetectable viral load of less than 200 copies per ml for at least six months, cannot transmit HIV to their sexual partners, even if we don’t use condoms!

Another option is PrEP (Pre-Exposure Prophylaxis). PrEP is where my negative sexual partner can take daily medication to protect themselves from getting HIV.  PEP (Post-Exposure Prophylaxis) is another option for people who have been accidentally exposed to HIV, such as a broken condom or a needlestick injury. PEP is a month-long course of HIV antiretroviral medication that can be taken after someone has been exposed to HIV.

As a woman living with HIV I find it very liberating and empowering to have these options available to me today, instead of being weighed down by fear and dread. With options like this, I experience a greater self-confidence and enjoyment in my sexual relationships.

If you want to talk to someone else in NSW living with HIV about your options to prevent HIV transmission, get in touch with Positive Life on (02) 8357 8386 or 1800 245 677 or email contact@positivelife.org.au