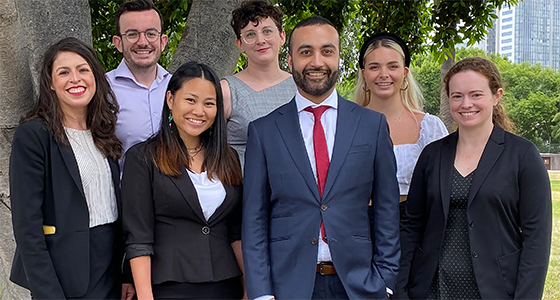 The HIV/AIDS Legal Centre (HALC) was formally established in 1992 after the ACON Legal Working Group and the AFAO Legal Project amalgamated.

As well as assisting clients, HALC has always run community legal education programs to inform service providers, health care workers, and the general population of the legal issues people living with HIV face. We also work closely with other organisations, and ensure our clients are referred to the medical, housing, case management, and counselling services they need.

HALC has seen a change in legal issues from our origins in the 1990s through to now. At the time HALC was established, the life expectancy of a person diagnosed with HIV was significantly lower than today, and our focus was on assisting clients with end of life planning including drafting Wills, Power of Attorney and Enduring Guardianship documents, and also assisting clients accessing superannuation to make their final years more comfortable.

In 2001, 20% of our files were Wills and Estates matters. This has halved to only 10% in 2021. During our early days, HALC was running hospital outreach programs at Sacred Heart Hospice and St Vincent’s Hospital for clients who were terminally ill and required urgent assistance in drafting their Will. For many of the gay men we assisted at this time, we provided specific advice on making provisions for same-sex de facto partners.

We are rarely called for an urgent Will requiring a hospital visit nowadays. We still assist in end of life planning for clients, but it is generally for clients who are planning for their longer-term future.

As antiretroviral (ARV) treatment progressed in the 1990s, our assistance in Superannuation and Disability Support Pension (DSP) applications declined dramatically as people remained employed following diagnosis, and doctors no longer advised patients that they should stop work following diagnosis. Discrimination in provision of services, health care, and employment based on a person’s HIV status have always been an area we assist in and we will continue to do so in the future.

Today a significant portion of our work is immigration due to the Australian Government’s health criteria for visas. Our work in immigration has grown exponentially from only 9% in 2000 to 57% of files in 2021. This is partly attributable to the change in health criteria and policy in 2009/2010 which increased visa options available for people living with HIV.

We have also seen a change in our client’s demographics since the 1990s and are now assisting more culturally and linguistically diverse clients than in earlier years.

In Australia only 12% of people living with HIV are women, but at HALC 20% of our clients are women, and have been consistently since our service first started.

This is because women have specific vulnerabilities and their circumstances are often made more complex because of factors such as domestic violence, societal pressures, and motherhood.

One of these clients was Suzie*. Suzie is from Uganda, she is a Finance Manager and was sponsored by an employer on a temporary work visa in 2013, and living in regional NSW with her Australian partner.

When she found out she was expecting a baby, routine prenatal testing showed that she was living with HIV. Her partner then left her and said he wanted nothing to do with the baby.

Distressed, Suzie confided in her close friend and work colleague.

Her friend said that they didn’t want to be anywhere near her, they told her that she had better terminate her pregnancy as they incorrectly assumed the baby would be born with HIV, and then the friend told everyone in the work place about her HIV diagnosis. She was treated terribly at work, and even though Suzie worked well, the employer refused to sponsor her for a permanent skilled visa, despite prior indications of their intention to sponsor her.

Suzie was terrified to return to Uganda, she had watched others in her community die from AIDS, including her brother. She didn’t want to leave her baby in Australia without a mother.

Suzie called HALC and she asked for help – three years later, she was granted permanent residency through a complex Ministerial Intervention process. HALC also then assisted her to bring her 12 year old daughter to Australia. Here is what Suzie has to say about the help she received from HALC:

I was introduced to HALC by one of the doctors at the clinic where I was receiving treatment as I needed assistance with a migration matter and a discrimination matter. I could not have afforded to pay a private lawyer. I called the legal centre I spoke to a lady and she said I could call her in case I needed someone to talk to. I had so many things to ask and every time she researched and gave me all the help I needed.

I grew up with a lawyer as a father and it was about winning and the money after that. I never once heard him talk about his clients and see him care. The HALC lawyers are true heroes to so many who will not want to write in for fear of being exposed. But we could be many saying the same things about all of them. For me, I know that my future is bright because I got help when I was about to give up. HALC stood by me and showed me the possibilities. I’m here and strong because my lawyer gave her time, worked beyond her duties and supported me. My kids will always be grateful because today they could have no mother if she had not heard that phone and said the words that she said.

*names of clients have been changed to respect and protect their confidentiality.