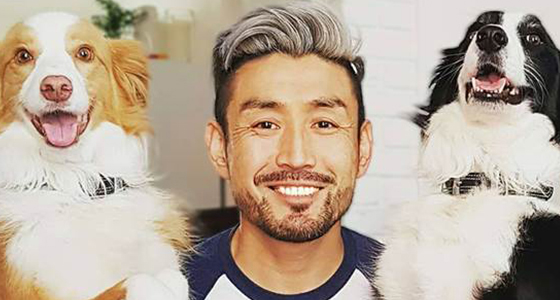 I was born in Japan and grew up in a middle class conservative family and received a good education. When I was 18 years old, the guy I was dating told my parents that I was gay, so I was forced to come out as a gay man at this time. While there were many gays and drag queens on TV and many Japanese people accepted them because they were famous, no one wanted to have a ‘gay’ in their family. My mum believed that being gay was a disease or a mental illness. She even tried to place me in a mental institution. This was a very difficult time, and we had a lot of family drama about this issue.

When I was younger, I hated Japanese traditional culture and family values and wanted to run away from the environment that I was in. So in 2001, when I was 27 years old, I finally escaped and came to Australia as an international university student.

Back in Japan, I had studied English for six years at high school but I never practiced speaking it with anyone.  Without the skill of speaking English to settle in foreign country, I found it very challenging in my first few years living in Australia. I badly wanted to live in a western country and communicate with people in English, so I refused to make Japanese friends for the first five years I lived here.

I tried to find Australian gay friends but it was not easy. I jumped online and utilised a gay chat room to practice communicating with people in English. Here I met a guy in the chat room and started dating.  We had sex after a few coffee dates and we didn’t use condoms. In Japan we were taught that condom use prevented HIV infection. However, my condom use was not consistent because HIV was not realistic thing for me. When I was in Japan, I never met anyone living with HIV.

After a few condom-less sex sessions, my new friend told me that he was HIV positive. He also told me that his ex-boyfriend had never got HIV even though they didn’t use condoms in the three years they were together. I knew that I needed to ask him to use condoms but I could not ask or negotiate with my limited English.

For me, there was also a cultural factor. In Japan it is not polite to tell other people what we want. This is considered selfish. I was scared I would upset him if I asked him to use condoms. So we continued to have sex without condoms.

Six months later I felt flu-like symptoms. I knew it was not flu so I requested a HIV test at the Taylor Square Private Clinic. The result came back ‘HIV positive’ in one week, just as I expected. My doctor told me via a Japanese interpreter that my viral load was extremely high and this showed that I contracted HIV within the past six months. It was very likely that I got HIV from the guy I was dating.

I was shocked but I could not blame him.  I blamed myself. I did not protect myself.  I grew up with strict parents and I believed that it was my responsibility and I must deal with the consequences of my actions.

I strongly believe that in protecting ourselves against HIV, we need to take a shared responsibility together whether HIV positive or negative. Understanding and learning the latest knowledge about HIV and then sharing that knowledge to your family and friends, our community, is the key to ending HIV related issues around the world.

I am so fortunate that there is support from people including other people who are living with HIV. Today, I am 43 years old and have been living with HIV for 15 years. I have gained confidence and grown into the strong resilient person I am today.