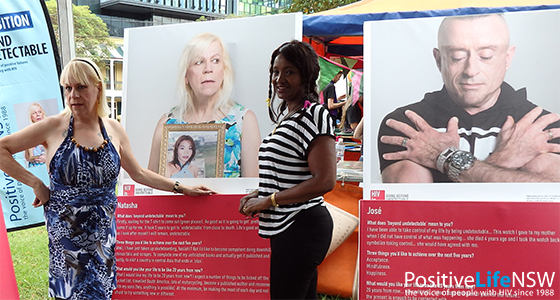 In late 2015, Positive Life PSB speakers were invited to be part of a photographic exhibition ‘Beyond Undetectable’ which supported a GILEAD HIV IS: campaign which aimed to describe what being undetectable means to people living with HIV now and into the future, highlighting how people living with HIV can plan to live long and healthy lives and the important role of research in this area of medicine. The exhibition was presented at World AIDS Day in Melbourne at the Doherty Institute.

The exhibition was a mechanism to initiate conversations around treatment in 2015 and current advances which mean PLHIV can live long, fulfilling lives, free from the burden of disease and the issues that treatments have traditionally presented for PLHIV. It was also a means to address issues around stigma and show that people living with HIV have real long term aspirations just like everyone else.

On Sunday 21 February 2016, the exhibition was showcased at the Mardi Gras Fair Day as part of Positive Life’s stall. A number of PSB speakers and trainees volunteered to roster themselves to be present at the stall, meet and greet members of the public as they viewed the images and to answer questions about the PSB and photographs in the exhibition.

We acknowledge the generous time of Paul Caleo who attended the full day, promoted the PSB and spoke with many members of the public who were browsing the exhibition. We also thank Natasha who was very generous with her image to promote the exhibition in SX and our social media. She attended the day along with other PSB speakers, Jose Machado previous PSB Coordinator, Zainab, Garth and PSB trainees Chris and Paul.

PSB Speakers, Natasha and Zainab at the
HIV IS photographic Exhibition, Fair Day 2016