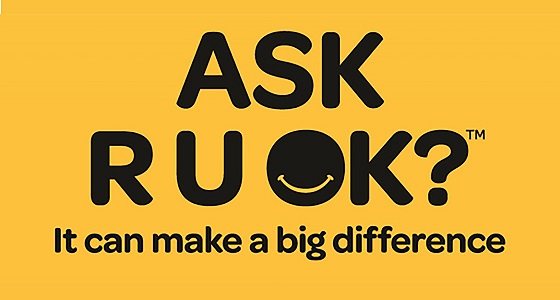 I’ve been suicidal twice in my life. Like most people in this situation, it occurred at a very painful time. The thoughts of suicide are a frightening and isolating place to be.

My first time, as a young farmer who thought of suicide, I had a violent plan but I could not go through with it. My second time was as a result of my neurological HIV issues. My thoughts did not make sense, even to myself. Having survived my first experience of depression and suicide, I knew things would get better. Counselling and treatment helped me this time around.

Each year on RU OK Day, 10 September, we’re prompted to ask our friends ‘Are you okay?’ It’s easy for a person to ‘normalise’ the question and respond with ‘alright’. Yet something has pushed you to ask, a ‘gut’ feeling that something’s not quite right.

Counsellors, nurses and other people with training around suicide, often talk about how someone speaks about their feelings in relation to suicide. These can mean anything out of character, elated mood after being down for a time or if they look increasingly stressed. There are also other warning signs.

As a partner or friend, these signs may be obscure, but we can also be better placed to see the subtle changes. It’s also natural to worry that by asking about suicide, we could say or do something to make it worse.

John Brogden, the Chairman of Lifeline, says that asking the ‘okay’ question is the first step [Video]. The next question, takes a lot of courage. It should be clear and precise. “Are you thinking about suicide” or “are you thinking of harming yourself?” This question is unambiguous, and the meaning is clear. It’s also pretty confronting, even for those of us who have been trained to ask the question. However, it is not going to tip someone over into taking action, especially if they’re already thinking about it. If they have been thinking of suicide it is often a relief that someone is there to share the pain.

Try to avoid saying “you shouldn’t think like that” or “c’mon, it can’t be that bad.” Their reaction will either be denial, or an apology. ‘Sorry’ is often followed by tears or further withdrawal. My usual go-to at this point is, “okay, so you’re telling me how bad life is for you right now?”

There is a lot you can do for someone who is suicidal. Being with them is number one. Listen to them if they feel the need to talk. It’s also time to think about getting backup and help.

You can support them to reach out and call Lifeline or Beyond Blue, who can guide you or them through what to do next and can even organise emergency services if needed. Alternately you could also offer to take them to the nearest emergency department, or call ‘000’.

I’ve had had to dial ‘000’ in the past for someone, and it still causes a lot of anxiety and self-doubt. In that situation, the last thing I heard from the person was that they had taken an overdose. They were not at home when I got there, and I didn’t know how to find them. Even though I’d called 000, I still doubted myself, “what if I’m wrong?” etc. The police found them unconscious in a park.

It was hugely reassuring to me, seeing how professional the police were and how supported I felt. The ultimate relief was that the person survived the attempt.

If you feel that someone might be suicidal, there is no harm in asking for help. Even if you feel suicidal, there’s no shame in reaching out for support. If this article has raised any concerns for you, you can always reach out to us at Positive Life.

There’s a number of other options as well. You might be more comfortable talking to someone on a helpline, like Lifeline or Beyond Blue. Another option is talking to your general practitioner to get some professional counselling which might be cost-effective or even free. If you’re employed, you might be comfortable speaking with your Employee Assistance Program (EAP) counsellor.

Whatever you decide, the main thing is to seek help and start talking about how you feel. As dark as your thoughts may seem, there is help available. While 10 September is RU OK Day, let’s make time every day to ask each other, “Are you OK?”

Where to find support: